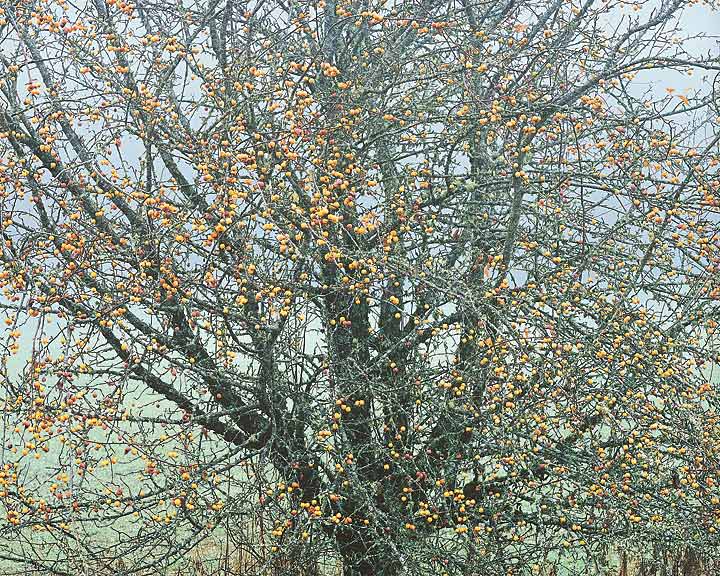 In 1989 Ruth and I were returning from a three month photo trip around the country. It was the beginning of December and we were pooped out. After 10,000 miles on the road we were 15 miles from home and I was sleeping in the car. Ruth was driving and spotted this tree as she went by. She woke me up, turned the car around and pulled over on the shoulder of the road with “You’ve got to take a look at this tree.” I did, liked what I saw, and took one photograph of it in the early evening light. This is not that photo.

We arrived home and settled in. Even though I hadn’t seen the processed film, I knew there was more potential in that scene than I’d been able to photograph. Four days later we had a very foggy morning with no wind, so I loaded the 8×10 gear in the car and drove back to the spot. Sure enough, the soft light and the dense fog gave a completely different, more peaceful feeling to the scene.

I used my Goerz 24” Red Dot Artar lens at f/45 for an 8 second exposure on Fujichrome 100 film. The final image has three visual layers: the golden crabapples on the tree, the structure and framework of the branches, and the delicate pastel foggy scene in the background. The color balance of the prints is extremely critical to allow for the best color separation of the warm toned apples and the cool toned background.

Despite the craggy, unkempt nature of the tree it has an abundant, overflowing harvest. If only we could be the same.