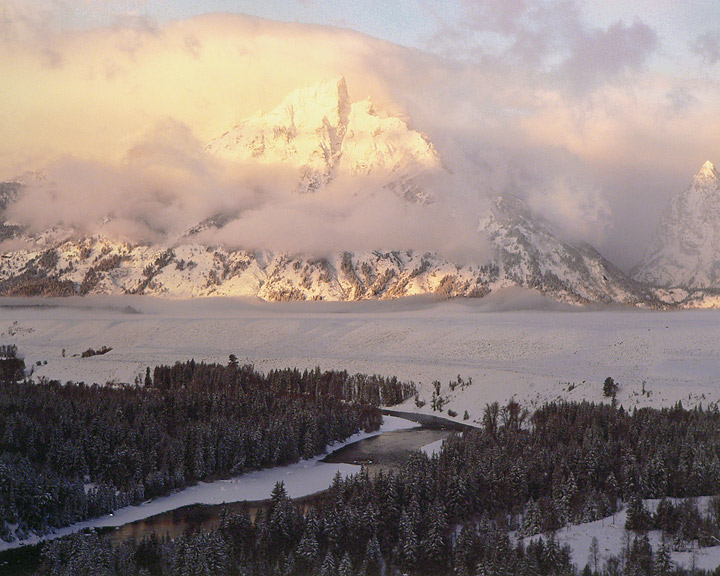 While traveling home to Oregon after a three month photo trip on the east coast Ruth and I spent the night in Ogden, Utah. It was a cold night on November 26, 1989 and we stopped at a motel for the night. As usual, I turned on my weather radio to see what the forecast was for the coming few days. As I listened to the crackly report I heard they were predicting a big snowstorm to hit the area north of us which would continue into Wyoming. The forecast of 24” of fresh snow in the Teton mountains was impossible to resist.

We set our alarm clock to wake up at 2am. We loaded up the vehicle which had four wheel drive, but no snow tires, and headed off to Wyoming with the goal to beat the snowstorm. Halfway there we discovered that the storm had moved faster than expected so I had to drive several hours through the mountain pass at night in near blizzard conditions.

The trip was worth it as we arrived in Jackson Valley around daybreak with two feet of fresh snow on the ground. The storm had cleared and the temperature had dropped to minus 15 degrees. The sun was coming up and would soon be shining on the top of Grand Teton Mountain. Ruth helped me get the gear out of the car and I set up the camera.

Extra effort was required due to the extreme cold temperature. I had to use my bare hands to make the adjustments on my metal 8×10 camera, putting my hands back into my gloves whenever possible. When I composed and focused the image on the ground glass I had to be careful to not breathe on it even one time, as it would immediately frost up and be unusable. So I would hold my breath as long as I could in the thin air, then pop my head outside the focusing cloth, take two or three quick breaths and go back under for another try.

I was able to take this one exposure with my 600mm lens at f/32-2/3 for 1/4 second on Fujichrome 100 film. Because the cold air was so clear, it’s extremely sharp even for 8×10” film. You can even identify a herd of a dozen elk on the right side of the photograph. While this view of the mountain is one that is often photographed, I felt that the fresh snow, clearing clouds and bright sunrise light on the mountaintop made it a worthwhile image. That was the only photograph I made that day. Since the weather conditions were holding with full sun and no wind, I decided to photograph here for two more days.

For most of our three month trip we camped out on the ground in a small pup tent but as this day was ending I suggested to Ruth that we find a motel room for the night, which was a definite splurge for us. She was thinking what a romantic gesture it was until I finished my thoughts with “…so the film won’t freeze overnight.” Oh.

Nevertheless it ended well since we spent two nights at the motel which had an uncovered outdoor swimming pool heated to 104° (!). We were the only ones foolish enough to use it that night which was kind of romantic, floating for an hour in the steaming water with bright stars overhead. Ultimately we had to brace ourselves and run all the way around the building to our room in sub zero weather, unlock the door and get inside, jumping into a hot shower to warm up again.

Later I discovered that while setting up my camera for this photograph the entire tip of my right index finger got frost nipped and was completely numb for a month with a blackened fingernail. That’s not good, but aside from being more sensitive to the cold the next winter there weren’t any long term effects. 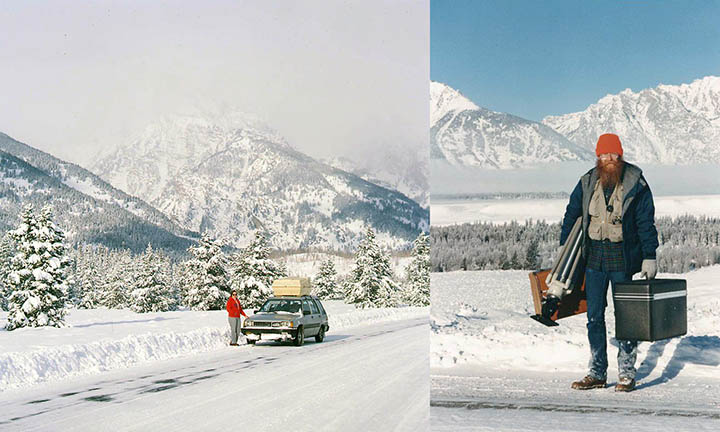