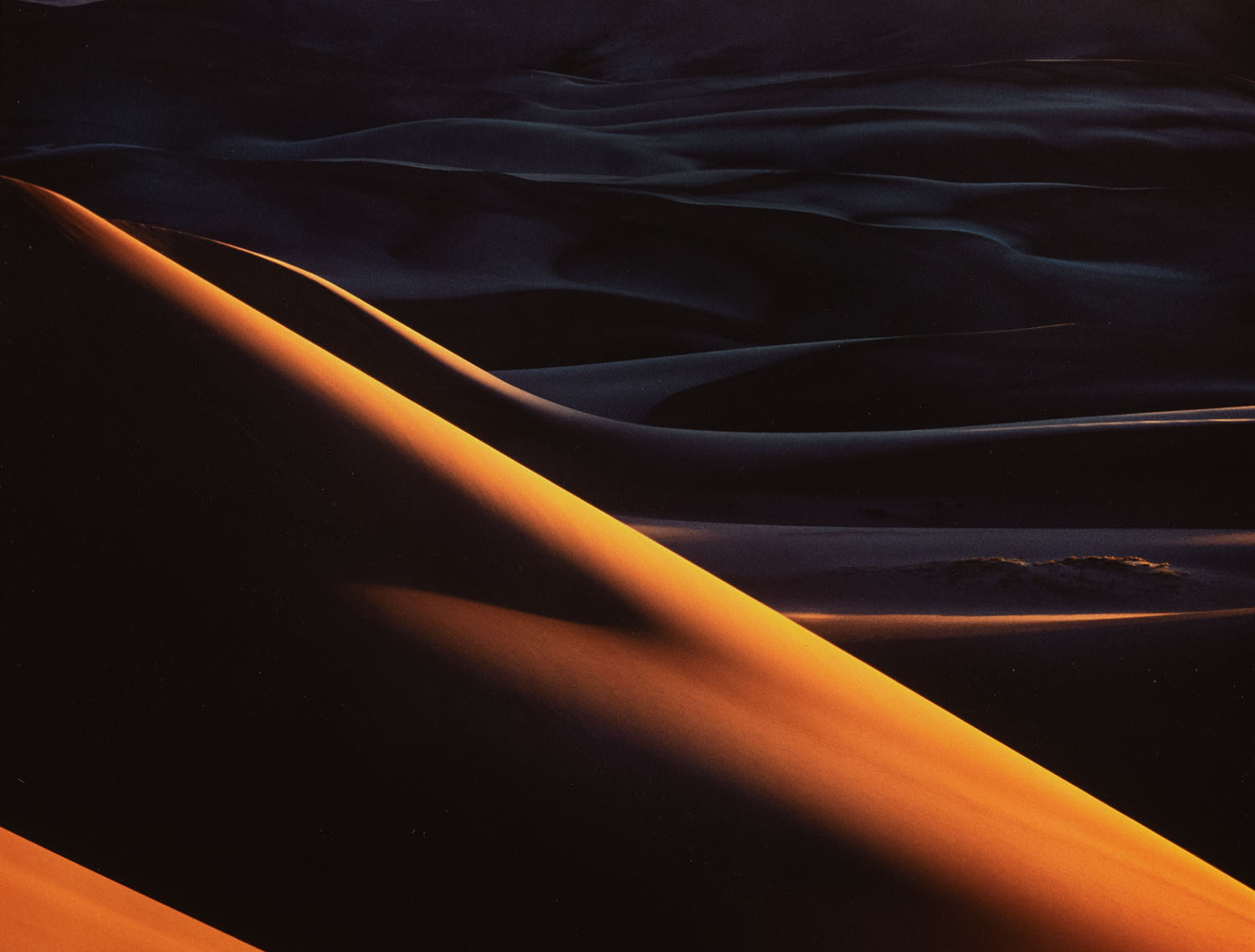 I exclusively used black and white materials for my first four years of photography. Eventually, I became interested in exploring the possibilities of color. At that time, it was possible to do high quality work only by using color transparencies. I had saved up my money for a long time and I was finally able to purchase a used Hasselblad camera with the normal 80mm lens.

Rather surprisingly, this image is one of my first color photographs, taken on the second or third roll (12 exposure) of film. I was living and working in Cheyenne and had a three day weekend for Memorial Day. My wife Ruth and I drove hundreds of miles south to Great Sand Dunes National Monument in Colorado and camped out for two nights.

After studying the light on the dunes for the first day, towards the end of the second day I hiked with the camera out over the dunes in the hot sun. Being rather inexperienced, I chose to hike over the hot sand in my bare feet—a choice I soon regretted. The light was magnificent but the wind was blowing a steady 20-30 m.p.h., kicking up sand everywhere.

I was walking carefully, studying each view before proceeding, lest I spoil a photograph by walking into it. As I neared the summit of the highest dune in the Monument, (over 750 feet tall), the elements of this scene fairly leapt out at me. I set my bag down in the sand and carefully got the camera out, shielding it from the blowing sand. I had to compose the scene by prefocusing the camera to the approximate distance, whirling around to face the sun and wind, whipping the lens cap off for a brief moment, catching a quick peek, then spinning around, placing the lens cap back on and trying to absorb what I briefly saw in the viewfinder.

I needed to move fast, as the sun was swiftly setting and the backlit highlights on the dunes were changing with every passing second. I carefully measured the light in the scene with my 1° spot meter, set the aperture and shutter speed and then, pausing with my back to the wind, I waited for a momentary lull between gusts. Facing the sun, I removed the lens cap, held quite still, and exposed the film—one shot only, then I turned from the wind and waited (with the lens cap back on) for another small reduction in the constant wind for one more exposure.

This is the only handheld photograph I have ever printed—it’s an image which still amazes me. Don’t ask me how I managed to do it! It was truly a gift to me and it was quite influential in my decision to begin to work exclusively in color.

I see in it serenity, power, and the unexpected, unified beauty which fills the earth.