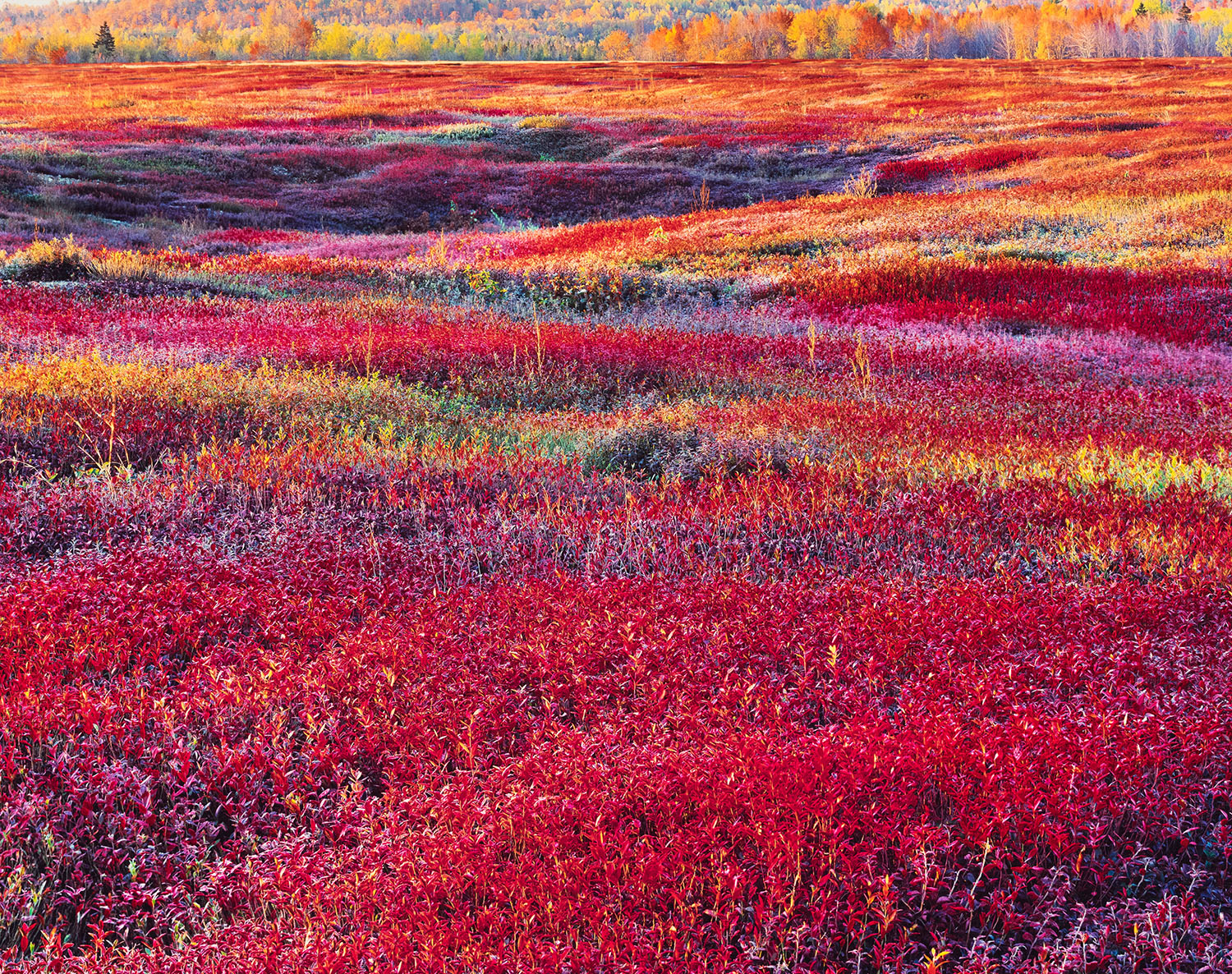 At the beginning of any of my photographic trips, I have some sort of goal in mind—some destination where I am headed. Often times, the journey to and from, and the photographs taken along the way prove much more interesting and worthwhile than the planned location. However, in 1994, the destination provided one of my most successful images.

In 1994, my goal was to head for the wild red blueberry fields of Maine—I had heard of these fields throughout many years, and I felt sure that this area had real potential. Ruth and I traveled for over two weeks across the country along a generally northern route and when we arrived in Maine, the blueberries had not yet turned colors. So we went further north to Grand Manan Island, off the coast of New Brunswick, Canada for a week and then back to Maine.

I had a great atlas of Maine with all the topographic features but I was unsure where to find the fields or what to expect when I did. After talking with numerous local people, Ruth and I were able to ascertain where to start looking. We spent some time “in search of the Red Blueberry” throughout the entire northwest area of Maine.

The blueberries are native and wild to Maine. They grow only a few inches off the ground and are managed by the local farmers in, occasionally rather large fields. Usually these semi-wild fields are small and flat and while interesting, are not particularly exciting to photograph.

I found one field to be the most interesting—the one in this photograph. It was quite large, had some areas of rolling terrain, and the colorful autumn trees at the back of the field. For four days I photographed this field, mostly in the first few minutes of sunlight in the morning and the last few rays at night. I shot more film on this field than I have on any other subject—about 50 sheets of 8x10 film!

Ruth talked with the owner of the property and got his permission to use the dirt roads which traversed the property, (thank you Mr. Gillespie!), although we were careful to not walk on the plants themselves. We camped about one mile away, in an old gravel quarry on a dead end road, so that we could be there morning and night.

I found the conditions in the morning to be visually the most interesting, due to the frost which often formed overnight and gave more shape and color to the plants. Over a few days time, I began to understand precisely where the sun would rise and how the light played across the fields. This photograph, taken on the last morning, was the most successful image of the series.

It has proven to be an immensely popular photograph even from its first introduction—oftentimes drawing surprised “oohs and aahs” from viewers. It was especially difficult for me to print it properly and it wasn’t until August of 1995 that I was finally able to make a print which I considered successful. To me it brings forth feelings of a festive celebration and a simple rejoicing in the exuberance and vitality of life.