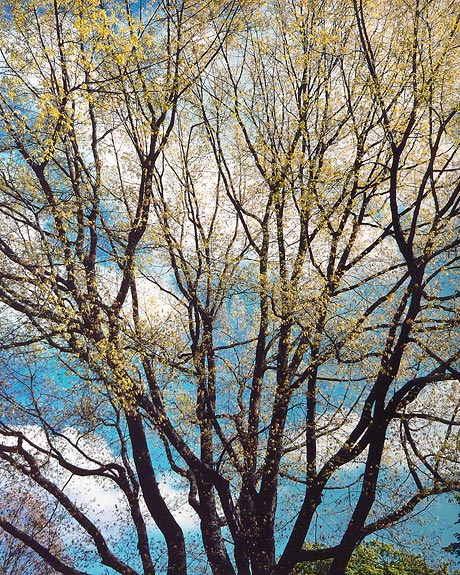 In April 23, 2007 we had a beautiful spring day with full sun and no wind. The flowers were blooming and trees budding and I had a burning desire to go out and see if I could find a photograph. So Ruth and I loaded the van with the 8×10 gear and we drove to a tree five miles from our home that I had seen a few days earlier.

It was a huge black oak tree near a historical stone building in the stage of growth that Robert Frost referred to as: “Nature’s first green is gold, her hardest hue to hold. Her early leaf’s a flower; but only so an hour…” And this was the golden hour for those leaves at a perfect stage of development. One day earlier or later they would look much different.

We worked quickly to set the camera up as the light was perfect and the clouds were changing. I waited until the clouds had the positions you see here and then made two nearly identical exposures using a 240mm lens at f/32-1/2 and 1/15 second exposure on Provia film.

What makes this image work for me is the multifaceted interaction between the visual layers of the sky and clouds, the black framework of the tree and the patterns of the thousands of light golden leaves. The Cibachrome prints have a depth, life and vitality that is very close to an iconographic depiction of irrepressible life.