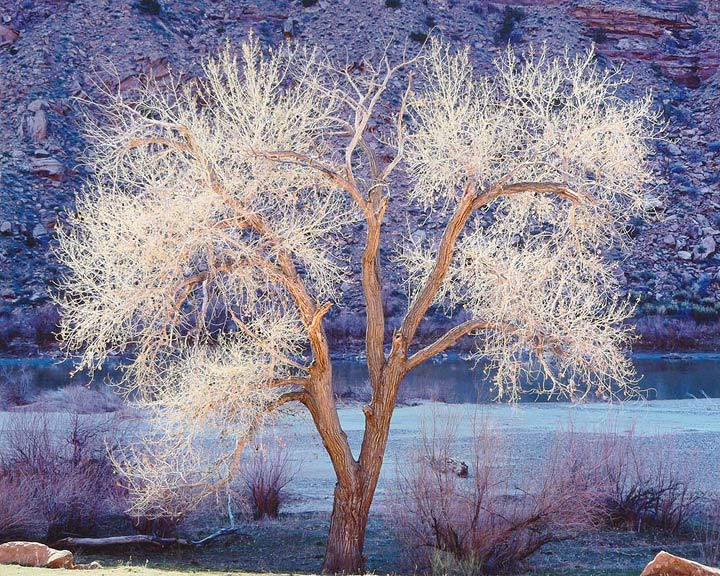 In 1987, I purchased my first 8x10 camera, with one lens. For many years I had worked to try to obtain superb image quality but it was only after I saw some prints made from 8x10 transparencies in the early spring of that year, that I realized what equipment I truly needed.

It was a perfect match from the very beginning. I had my camera for two weeks and bought a second lens. Two days after receiving the second lens I left Oregon on a cross-country trip to Connecticut where I was to work for three months, setting up the color department for the Meriden-Stinehour Press.

I was camping out of my car, using a very small tent while I spent two weeks traveling out east. I past through Utah and spent some time at Canyonlands National Park and Arches National Park. That morning, I had worked for the last time at Arches and was proceeding up Highway 128, which runs next to the Colorado River.

About midday, I came to this cottonwood tree next to the river. The sunlight was backlighting the tree and the cliff was only partly in shadow. I quickly setup the camera, realizing that in only a few minutes, the cliff shadow would come to the base of the tree and could result in a very worthwhile image. I knew from experience that the shadowed areas would pick up the strong blue of the southwestern skies and that this blue would surround and enhance the warm whites of the cottonwood tree in the final image.

After carefully composing and focusing the image, I waited for the shadow to lengthen. Within 10 minutes of first seeing the scene, the shadow had arrived and I exposed only one piece of film. Only a few seconds later, the base of the tree and the bright stones at each lower corner were completely in shade.

While I photographed this tree in 1987, it was not until the summer of 1995 that I printed it. This was partly due to the immense popularity of my photograph, Cottonwood and Light, and partly due to the difficulty of printing this image to maintain both high brightness as well as separation of tone in the whites. The recent development of a unique, proprietary masking method has given me the necessary printing tools for this image.

To me, this image is all about light and transformation—almost transfiguration. It reminds me that there is much, much more than the tangible, physical stuff we bump into and usually think of as comprising our world.