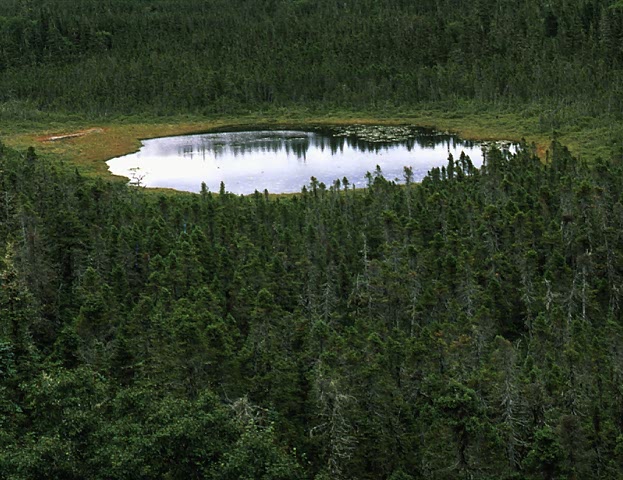 In 1987 Ruth and I went on a five month long photo trip, camping out almost every night in a very small pup tent. We spent one month in Newfoundland. We found the people charming, kind and helpful. The older folks had a thick 17th century accent which we found indecipherable (Otle = Hotel; whit wools = white whales).

We discovered Newfoundland to be mostly flat and rocky with constant wind from morning to night. The towns were predominately located along the coastline with the interior wild and undeveloped, much as it had been hundreds of years ago. I was very frugal shooting my 8×10 camera since I only had 12 film holders, 24 exposures, to last a month.

This scene is of a pristine small pond surrounded by Black Spruce trees. In all likelihood it looks the same today, 33 years later. I used my Schneider G-Claron 305mm lens at f/32 for 1/2 second on Fujichrome 50 film.

I first printed this image onto Cibachrome after 8 years, in 1995. To me it’s a very peaceful image with delicate colors which are representative of an untouched part of the world. Newfoundland is large and very sparsely populated. If you walk off the road a bit you feel that you could very well be the first person that’s ever walked on that spot.