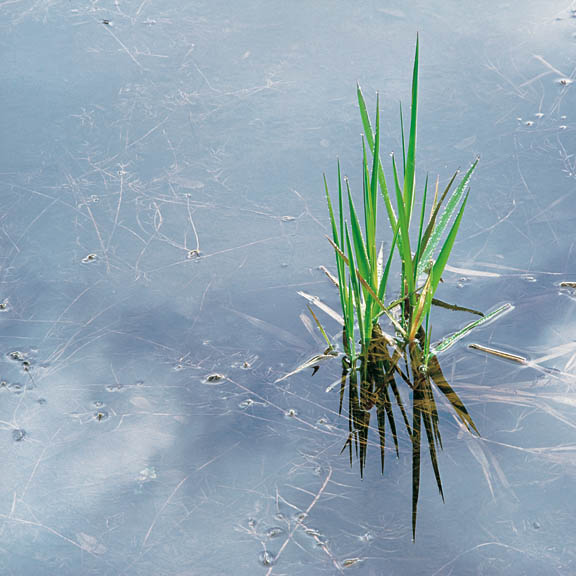 It was spring in western Oregon in 1992 and the rain had been nonstop for weeks. We finally had a break in the weather with mild temperatures, partially cloudy skies and no wind. A good day to look for a photograph.

At the time our home was in Vernonia, a small town in the Coast Range. I first looked for an image at the local former millpond but didn’t find anything of interest. So I headed north out of town one mile to Stoney Point Road, took a left and found a fallow field that had a large pool of accumulated rainwater from the two or three weeks of recent storms.

This beautiful small bunch of grass caught my eye, a small icon of spring. Full of life, radiant and with small raindrops clinging to the rough edges of the vigorous new growth. The beauty of the grass was set off by the sky reflections which softly mingled with the remains of last year’s grasses under the water’s surface.

I used my 250mm Zeiss Superachromat lens with a 21mm extension tube to allow for close focusing, waited for the cloud reflections to be optimum for the composition, (with the darker areas close to the grass and the brightest clouds in the lower left corner) and took one exposure on Fujichrome 50 film.

When I saw the developed transparency I was pleased with the image but knew it would be difficult to print. Twelve years later in 2004 I was ready to do it. The final Cibachrome prints have subtlety and depth with an almost silvery luminosity. The strong angular blades of grass and dark reflections are highlighted by the pastel, softly tones of the water.

This peaceful image is filled with light and life, a prayer and a poem.