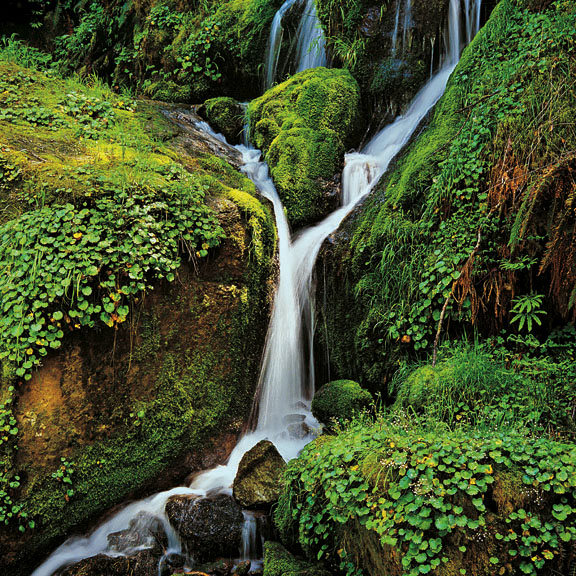 In 1983 I was still running a 40” four color sheetfed press, often working 68-72 hours a week which didn’t leave much time for photography. One lovely spring day I had a Saturday afternoon off so Ruth and I decided to hike the Columbia Gorge in Oregon. The gorge has numerous waterfalls and paths which go up and down the steep cliff sides. I wasn’t interested in the usual photographs of the dozen or so well known large waterfalls but hoped to find more intimate, quiet scenes.

Ruth was carrying my Hasselblad outfit using a home made waterproof backpack that I had designed and sewn together which had compartments for lenses, backs, camera accessories and of course the camera body. It was designed so she could leave the backpack on while I accessed the pieces of equipment I needed. She referred to herself as the “Pack Ruthie.”

We found this small unnamed waterfall near an upper part of a trail. The lighting was perfect for the moment with soft light over most of the scene but a spot or two of sunlight coming through the tall trees. One of the spots was perfectly highlighting right where two rivulets joined. I used the 80mm lens on my Hasselblad and made one exposure on Ektachrome 64 film.

It was 10 years before I made my first successful Cibachrome print of this image in 1993. I had tried earlier but was never satisfied with the prints. They were either too contrasty or they became flat and lifeless. After 10 years of contrast masking I gained enough experience to be able to get what I was looking for: good tonal separation in the water with bright and detailed highlights, a sense of shape to the mossy stones, and the soft feel of the scene with dappled sunlight without harshness.

As a side note, on that same day I was able to also make “Sword Fern and Oxalis.”