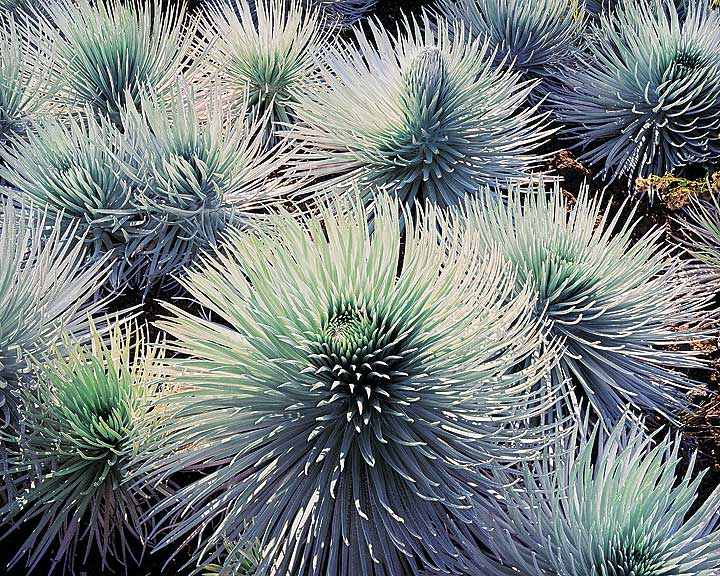 In 1996 Ruth and I traveled to of Hawaii to photograph. We spent about a week on three different islands: Hawaii, Kaui and Maui. This photograph was taken on Maui, at Haleakala National Park.

The Silversword plants grow only on this island and are a protected and endangered species. They are certainly unique and are remotely related to sunflowers. I found them to be extremely beautiful and visually extremely interesting, and I photographed them under many different types of lighting.

I initially tried to photograph them under cloudy or shady conditions. I thought that they would be excessively contrasty when photographed in full sunlight. They are quite silvery-white in color, with each leaf covered with fine hairs which channel the sunlight toward the center of the plant. The elevation is rather high, around (7,000) feet above sea level and the sunlight is especially intense.

After a couple of days of working with softer light, I felt that I really needed to try full sun. Visually, the plants looked their best under sunlight and the effect of the reflecting leaves could be seen best. Metering was extremely difficult, even with a 1° spot meter, as all of the pieces are very small. The situation was more complicated because I had never photographed anything quite like these plants, and I was not sure how they would the film would render their colors. By the time I saw any processed film, I would be back in Oregon.

I photographed this group of plants right at the visitor’s center. They were in a protected area, surrounded by a rock wall. I placed one leg of the tripod on the wall, with the other two on the ground. Carefully tilting the camera forward, I brought the image into focus. I used my 240mm Nikkor W lens for this photo at f/64. I also tried using my 210mm lens, but I preferred this angle of view.

Fortunately, the exposure was correct for the transparency. I knew it would be close: I was using Fuji Velvia and the contrast range of the scene was rather extreme. I made a significantly dense contrast mask for printing, taking a couple of tries before I had it just right, and the color balance took many sheets of paper. This was the first print I made from the entire Hawaii trip and remains one of the most exciting for me. I was so enthused that I immediately printed a number of 30x40” prints also.

The image for me speaks of shining, shimmering light and delicacy and grace. It is also an exercise in fine printing and tone reproduction and it is a task to be able to hold the white and near white values, and to keep the greens the right shade, with just the right tonalities throughout the print.