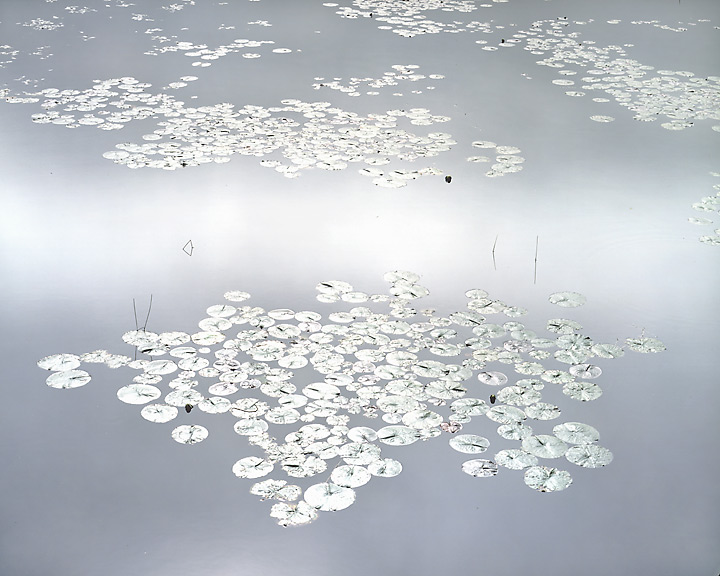 In 1989 I returned to the Stinehour Press in Vermont for a month to give a refresher course in drum scanning for their employees. The Stinehour Press was world renowned for their quality printing of museum catalogs and fine art reproductions. I had spent three months in 1987 training their scanner operators to do quality color scanning as well as duotone and tri-tone black and white scanning, and dot etching for local color corrections. I drove across the country photographing along the way. After the month of training, Ruth flew out and we be-gan another photo trip.

We were in Maine around the middle of September alongside the Androscoggin River in the early morning. There was no wind and the sky was lightly overcast. There had been fog on the river but it had lifted. The sun was coming through the overcast and rising fog, lighting the scene like a perfect light tent. That is, perfectly even, soft lighting with no shadows whatsoever. In fact, in my many years of photographing I can’t recall another time when I noticed such perfectly soft and diffused light over an entire scene.

I used the front and back tilts to get the entire scene in focus with my 450mm lens and only had to stop my lens down to f/22-1/3 for an exposure of 1/60 second on Fujichrome 100 film. Unbeknownst to me at the time, on the middle of the right side of the Cibachrome print you can see faint ripples in the water where a fish had come briefly up to the surface just before I clicked the shutter. An extra little touch of grace for the moment.

The transparency came out perfectly with no dust specks exposed on the film. However I wasn’t able to print it for many years because it would have been virtually impossible to put it in a glass carrier in the enlarger and not have dust specks, which make black specks on the Cibachrome print, or newton’s rings, which are circular light interference patterns caused by the interaction of light between the film and the glass plates which hold the film flat.

However, when we moved our studio and darkroom in 2002 I purchased a second Durst 8×10 horizontal enlarger which came with a set of stretch carriers which allow you to make prints without glass plates. The stretch carrier for 8×10 film grasps all four corners of the film and then pulls the film tight with equal tension all around: no newton’s rings, no dust problem. This allowed me to make Cibachrome prints of this image for the first time in 2003.

This is one of the most difficult images I have to print due to the uniform neutral grey colors, the delicate highlight values all around, and the need to keep every speck of dust off of the film or print material. When I showed Richard Jackson, a fine-art Cibachrome printer, a 40×50” print he told me “I would refuse to print this.”

Still, the effort is worth it as the Cibachrome prints can have a breathtaking luminosity with the waterlilies peacefully floating in a world full of light.