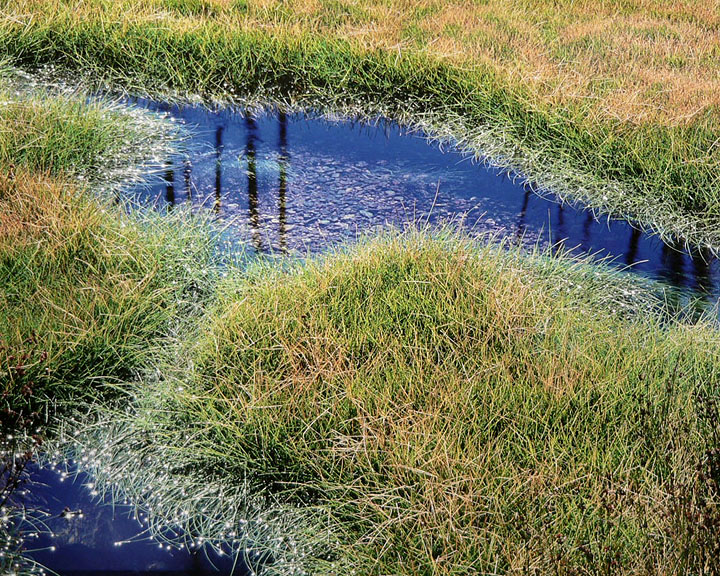 In 2004 Ruth and I went on a two week photo trip to Wyoming, Montana and Colorado. The weather was bright and sunny, the wind moderate. I was fortunate to be able to make seven worthwhile images on that trip.

Yellowstone National Park had a massive forest fire in 1988 that burned over 1,200 square miles of forest. Here we were, 16 years later and the landscape was rejuvenating by leaps and bounds. Many of the burned areas were full of black dead trees but there were new trees growing everywhere and the grasses and meadows were full of new life.

I found this small clear creek which flowed into a large lake and spent about half an hour studying it until I found this composition. It contained all that I was seeing and experiencing in this rejuvenated landscape. It was full of life, with sparkles of sunlight around the edges of the crystal clear water and a dozen soft reflections of burned out trees, a fading memory of the formerly scorched landscape.

The composition required I use my 600mm Fujinon C lens and I knew that getting enough depth of field would be a challenge. It took about 20 minutes to make the camera adjustments, since it was critical that all the grasses throughout the image be rendered very sharp. Ruth was invaluable with this process, as I could keep my head under the focusing cloth as she changed the f/stops on the lens, opening and closing as I adjusted the swings and tilts and overall focus.

It was perfect lighting for this scene, with full sun almost directly overhead and thus, very few shadows. I made one exposure at f/64-1/3 for 1/2 second on Provia film. I also made an exposure at f/64-1/6 for one second on Velvia film but the Provia film was a better match for the colors and contrast of the scene and is the one I used to make Cibachrome prints.

Making the Cibachrome prints is a bit of a challenge. The contrast mask has to be very precise to allow full tonal separation in the grasses without a feeling of harshness. The color balance is surprisingly critical due to the three main colors in the scene: intense blue, vivid green and bold russet tones in the dried grasses. Considerable precise dodging and burning is required throughout the image to harmonize the tonalities of the grasses and balance the brightness of the multitude of sunstar scintillations.

The sunstars are not from a filter but happen naturally when super bright sparkles pass though the small aperture of a camera lens. When I composed the image I hoped this would happen, as it is an important part of the composition.

The landscape had gone from death to life and in its resurrection it was full of blessed light.