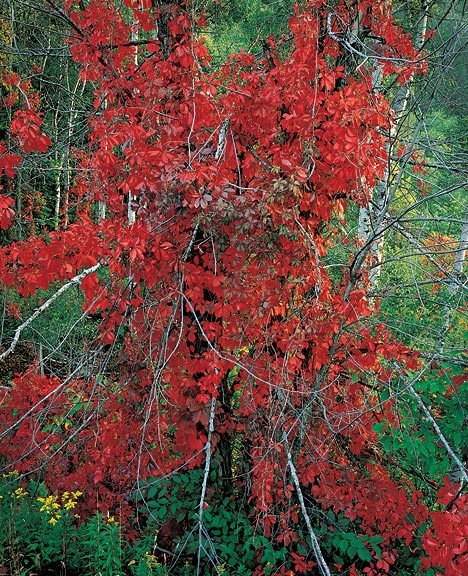 While working at the Stinehour Press in Vermont in 1989, I spent virtually all of my free time photographing in the area. One autumn weekend Ruth and I decided to travel north to Canada to see what there might be to photograph. After working most of the day rather unsuccessfully with the hardwood forests in northern Vermont, we were winding our way along a country road, approaching the state line.

The sun was setting rapidly in the west—casting a soft, angled light across the landscape. As we came around a bend in the road, I saw this red woodbine vine and asked Ruth to stop the car. Approaching the vine, which had grown in the framework of a small tree, I saw that there was a real potential for a photograph.

I was undecided as to how best to portray the vine or even which lens I should use. I put three or four different lenses on the camera, setting up at various distances until I settled on this one—a 240mm, slightly wide-angle. Fortunately, it was still September, so that the evening light hung in the air much longer than later in the season.

The exposure was difficult to calculate, as the bright highlights in the background were too small to accurately read with even my 1° spotmeter and the meter inaccurately read saturated red values. Fortunately, I knew from experience and testing about the red problem and so I based my exposure on the greens (which also needed a small amount of compensation from the normal meter reading) and the range of the scene from other bright values, as well as from an overall visual sense of the contrast and lighting.

Feeling confident in the proper exposure and visualization of the scene, I exposed only one sheet of film as Ruth chatted with the curious neighbors so that I could work unencumbered.

The printing of this image requires the use of some sophisticated masking techniques so that the shape and detail in the deep reds is preserved. To me, the image reflects the feelings of a celebration of life and accurately portrays the warm, enveloping light of that evening.