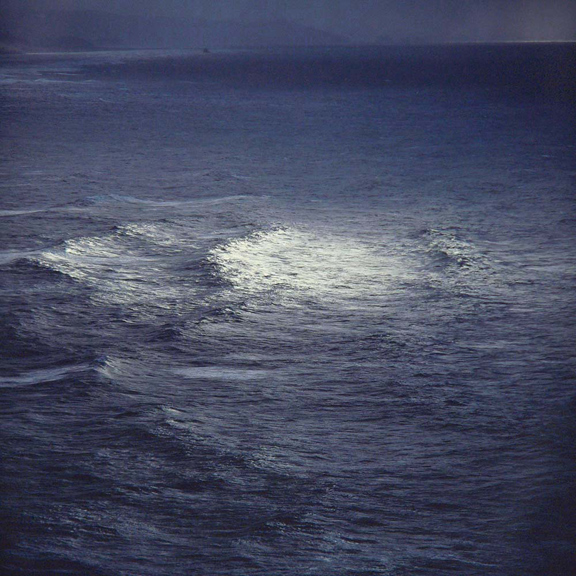 One winter’s day in 2006 I found myself on the north Oregon coast, photographing the ocean during what is politely called “unsettled weather.” On this afternoon there was a series of rain squalls that came and went with occasions when a spot of sunlight would peek through the clouds.

I had my 300mm Zeiss Tele-Superachromat on my sturdy Sachtler carbon fiber tripod and had prefocused the lens on the waves in front of me, calculating the proper exposure on Provia film. Remarkably, a narrow beam of sunlight came though the storm clouds and landed right where I had prefocused. I waited for a small wave to pass through it and then made this one photograph with the light on the calm spot between the waves. And then it was gone. The entire time the light was on the ocean was less than seven seconds. It was unforgettable.

The blue-black colors and highly resolved texture of the water in the Cibachrome print, combined with the rain in the background and a hint of sunlight in the upper right corner give an almost biblical feel to the image for me, similar to a Gustave Dore etching. The feeling I get from this photograph is of grace and light, thus the name.