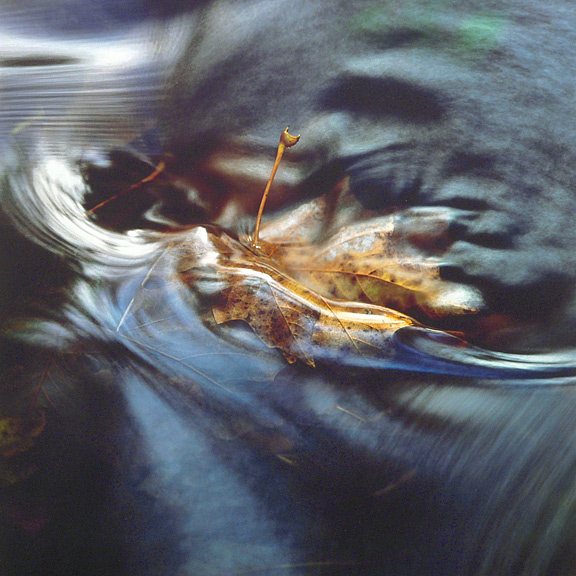 In 1986 I was working full time operating a 40” four color Miele printing press. I worked 12 hours a day, five days a week and usually 8 hours on Saturday. We worked straight through with no breaks whatsoever. Autumn had come and gone. I had not made one photograph.

Finally I had one Saturday off. The weather was not bad, some sun, some clouds but no rain. I was one year away from getting my 8×10 camera so at the time was only using my Hasselblad. I put my camera outfit and tripod into the car and went out with a burning desire to find a worthwhile image or two.

It was slim pickings out there. The leaves were off all the trees and the colors were dreary. Undissuaded, I kept looking for something that would make a worthwhile photograph. After about an hour I came across this maple leaf in a small stream. The leaf had hung up on a rock and was completely underwater except for the stem that shot skyward. The flowing water created remarkable shapes and patterns.

I put a 21mm extension tube on my 250mm Superachromat lens so that I could focus close enough to get the best composition. I took only one photograph on Fujichrome 50 film. I don’t remember the exposure time but it was quite fortuitous, as the various water swirls and patterns could not be more perfect for this image.

After I made this photograph the sun came out and 15 minutes later I photographed the same leaf with the same lens setup but from a different perspective which resulted in my photograph “Maple Leaf and Sunlight.” That image has swirling scintillations and bright colors. The two images are remarkably different and are a good example of how creative photography can be done with the most humble of subject matter. Those were the only two photographs I made that fall. Two exposures, two photographs. It was enough.