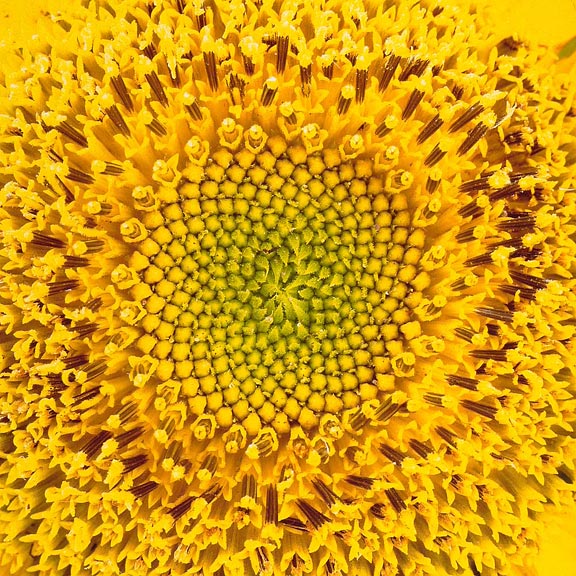 When Ruth and I returned from our 1987 five month photo trip around eastern Canada and much of the US we had quite a few worthwhile images but not much money. So at the beginning of 1988 Ruth went back to work as a paramedic and I got a job running high end drum scanners for a color separation company and continued work on remodeling our home and getting ready to install my first Kreonite Cibachrome processor in our basement.

With very full schedules we weren’t able to go on any photo trips in 1988. In July I stopped at a country farm market where they grew their own produce. They had planted a row of sunflowers next to the road and I asked if I could purchase one small sunflower head. They hadn’t thought about selling any of them this early in the season but I offered them a good price and was able to bring this one home with me.

I set about finding the best way to photograph the enticing center of this sunflower blossom. The portion of the sunflower in this photograph is only about 3” from edge to edge. I tried using my Hasselblad with extension tubes but I couldn’t get the effect I wanted. I had recently made an adaptor for my 8x10 camera that allowed me to mount my Hasselblad camera on it. By doing so, I could use some of the front view camera adjustments to match the plane of focus to the plane of the subject matter.

I fastened the small sunflower to a spare tripod I had and illuminated it with the soft light coming though the 4x4’ skylight in our dining room. I used a Fujinon A 240mm lens and exposed Fujichrome 50 transparency film, calculating the exposure with a significant bellows extension factor added. I didn’t write down the exposure time but I remember it was in the 10-20 second range. This was the only photograph I made in 1988.

When I saw the processed film I was pleased with the image but didn’t successfully print it until 2008, 20 years later. It is extremely difficult to get the proper amount of shape and shading to the multitude of bright yellows and to preserve a sense of depths to the image. The photograph has a strong graphic quality which is accentuated by being reproduced larger than life: on a 30x30” print it is about 10X life size.

There’s a reason this plant is called a sunflower… the image of the sun is unmistakeable. Thus the title of this image: Helios is the Greek name for the sun.