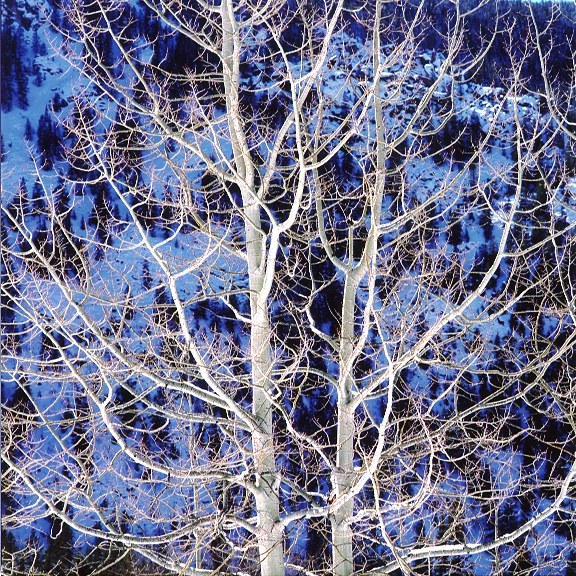 In the winter of 2000 I had a gallery opening in Aspen, Colorado. Ruth and I flew to Denver, rented a car and drove to Aspen. I brought with me a stripped down version of my Hasselblad outfit which included only three lenses and a smaller tripod than usual with the hope that I might have a bit of time to photograph before or after the gallery opening.

We had a few hours on the day of the reception to photograph so we got drove east on Highway 82 towards Independence Pass, not being deterred by the “road closed sign.” The day was sunny and calm and seemed not too cold as we drove up the hill. The road had been snow plowed for 12 miles before it ended in a huge snowdrift. There were a few families with children here and there but not at all crowded. Everyone seemed to be having a good time and I was once again struck by how sound traveled better in thin air, since we were now above the 8,500 foot elevation.

We came around a corner and I saw this two-trunked aspen tree with remarkable light on it and the perfect background of the opposite mountain in the shade. I could also tell from experience that the contrast range of the lighting would be a good match for the transparency film I was using. While it’s necessary to use a light meter to calculate the correct exposure, it is possible to train your eyes to see contrast levels remarkably well.

I composed the image using a 180mm lens on my Hasselblad camera using Velvia 50 film, first walking around looking through the lens to compose the image, then setting up my tripod very close to the snowbank behind me. The bright sunlight was bouncing off that snowbank to provide fill light to the tree from an upward angle contributing to the luminosity of the entire tree. Quite a glow!

The image has two visual layers: the backdrop of the mountainside and trees in the shade and the sunlit white aspen tree in the foreground. The two layers visually interact with each other so I placed the darkest part of the background precisely between the two white trunks and the rest of the background graciously fell into place with the white tree branches. The two visual layers were further separated by choosing the right f/stop so the background would be purposefully slightly out of focus. If it were rendered as sharp as the tree branches it would result in a visual mishmash.

While it takes many words to describe this, the actual composition was done quickly and intuitively without words racing through my head. Speed was necessary as the shadowed mountainside was in the process of become sunlit as you can see in the upper right corner. Another five minutes and the composition would be severely compromised when parts of the sunlit mountainside would be as bright as the tree branches.

I knew that the exposure of the film had to be exactly right to preserve the highlight values in the brightest branches. My 1° spotmeter couldn’t read those values from where I was standing by my camera so I walked up to the tree as close as I could to measure those light values accurately, making sure my readings were made from the same angle as the camera lens was seeing the tree. To hold those bright values meant that the darker parts of the trunks would be rendered darker than I wanted them to be on the final Cibachrome print, but I knew I could maintain those bright white values and at the same time lighten the darker parts through careful contrast masking.

The final Cibachrome prints have a great deal of luminosity and depth, helped by the color contrast of the blue background and the slightly warm tones of the tree. Aside from a precisely made contrast mask, each print still requires a surprising amount of careful dodging and burning to maintain a visual cohesiveness to the two aspen trunks and multitude of white branches.