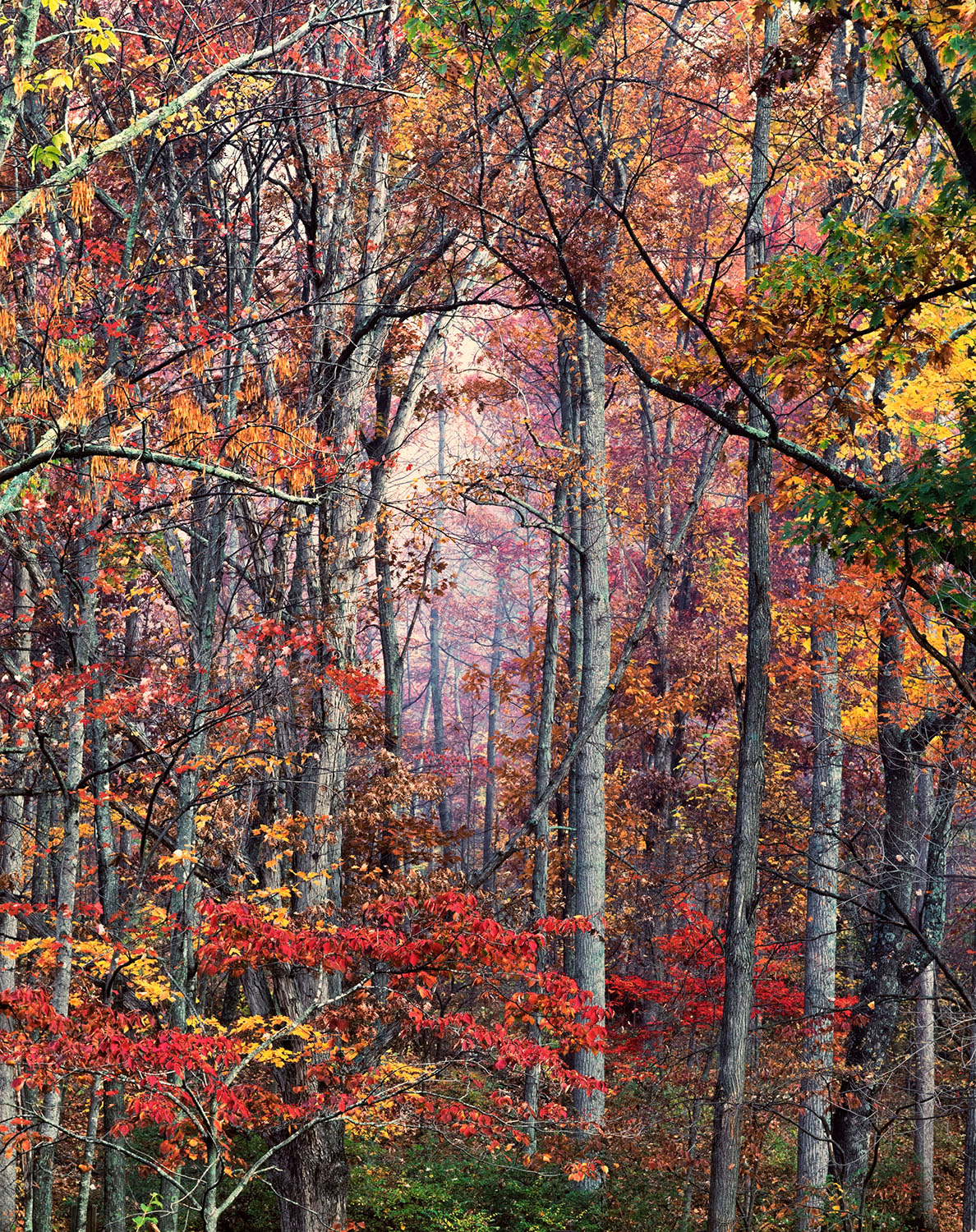 In the year 2000 Ruth and I went on another photo trip in our camper van. We started in mid September in Colorado then Utah before traveling to Pennsylvania ending up at Sherando Lake in Virginia in mid October. Sherando Lake Recreation area is a Forest Service park and campground and is promoted by them as “The jewel of the Blue Ridge Mountains.” The second day we were there we were about to confirm that lofty designation.

As usual on a photo trip we got up before dawn and went to see what we could find. The morning was chilly but completely calm. This area is in a small narrow valley with steep sides so as the sun began to rise the valley was in shade but the sun’s rays were passing overhead, giving a wonderful glow to everything. Sherando Lake itself had low fog over it which was drifting into the trees. The stage was set.

Ruth waited in the van as I searched for a photograph, knowing that this special light and conditions were going to last for only a few minutes. I was inwardly quiet but burning with the desire to not miss this rare opportunity. I was studying the forest, aware that the fog from the lake had drifted into it but not between me and the forest. Then the sunlight began to hit the ridge behind the forest, lighting it up.

As I moved about looking and looking I reached one point where the composition presented itself to me. Only in one specific spot do the trees and forest line up as you see them here. Move one foot left, right, back or forth and it disappears. I called Ruth on our two-way radios and she hustled over with the van and equipment. I told her which lens I needed to use and quickly set up my Sachtler tripod in the spot I had marked on the ground with my baseball cap.

Ruth had the camera out of the case by the time I had the tripod leveled and I snapped it in place with the quick-release tripod connection. I extended the bellows while Ruth put the lens onto the camera and got out the compendium lens shade. I composed the image, using the rising lens front to avoid converging verticals and focused on the ground glass, calling out f/stops for Ruth to close and open the aperture. I was only barely able to get everything in focus but I had to be sure because having any important part of the image out of focus would render it unusable.

When I was confident that all was OK, Ruth dusted off the film holder while I computed the exposure. In the five minutes it had taken us to set up the camera and make ready, the light had become even better. The sunlight was bouncing off the hillside and though the fog that was now in the woods but nowhere else. I used my 800mm lens at f/64 for an eight second exposure on Velvia 50 film. I quickly reset the shutter and put another film holder in the camera and took a back up shot but the fog and light had changed so much in less than a minute that the second exposure was useless.

I would have missed this photograph had Ruth and I not been photographing for the previous month so that we had our teamwork fine tuned or had I not purchased my (very expensive) Sachtler ball head carbon fiber tripod with triple extension legs which unlock and lock all three sections with one lever and has a fail-safe quick lock camera mount. It was certainly one of the most perfectly timed, grace filled photographic experiences of my lifetime.

We spent two more days photographing at Sherando Lake and the surrounding area. I told Ruth that I had the photograph I came for, so she drove me to the airport in Knoxville, Tennessee and I flew home with the film under my arm while she began the long drive home.

When I examined the processed film with a magnifier I was relieved to find that it was exposed correctly and nothing wiggled during the eight second exposure. I spent the next two days fine tuning the hand printing of the image until I had a good 30x40” print. As soon as I put it on the easel I called Ruth to tell her that more than any other image of mine Glowing Autumn Forest embodied everything I had been trying to convey through my photography for 25 years.

Now, 20 years later I can still feel the inward glow of that moment and the feeling that all the effort has been worthwhile.