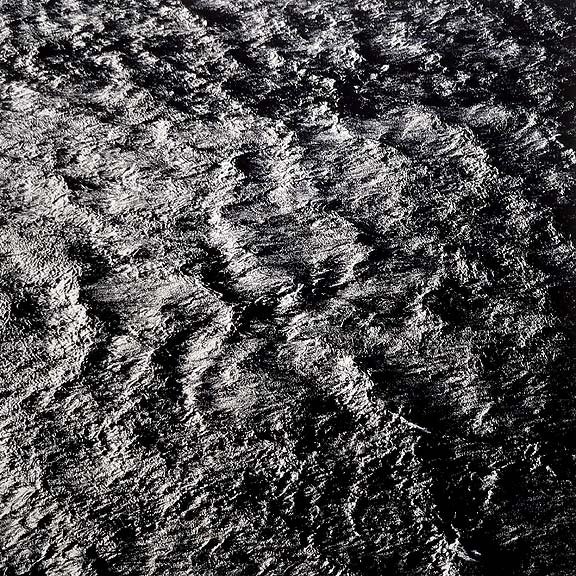 In 2004 Ruth and I went on a two week photo trip to Montana, Wyoming and Colorado. We had planned to be gone longer but the trip was cut short by a massive storm that came in and blew all the leaves off the trees.

This image was made at Flathead Lake in Montana. It’s a huge lake, about 200 square miles, and on that day there were full gale force winds blowing with gusts even greater than that. Of course this made most landscape photography impossible but when we came to this lake I was fascinated with the patterns formed on the waves by the extreme winds.

The sun was shinning brightly and reflecting off the waves. When the gusts hit they had such downdrafts that they would actually flatten the waves. I’ve never seen such winds before or since that day. The wind was so ferocious that I had to find a somewhat sheltered area to set up my tripod. Even my large Sachtler tripod which can support over 50 pounds wouldn’t hold my camera steady under the buffeting of those winds.

I found one spot where I had a rock wall at my back and set up the tripod with my 250mm Superachromat lens on my 205 TCC Hasselblad body. Nothing less than the fastest shutter speed would catch the sharp details of the patterns I was seeing in the waves. And nothing less than the finest optics would resolve those details without any chromatic aberrations. The Superachromat has the most perfect color correction of any lens and the 205 TCC has a top shutter speed of 1/2000 second. Check and check.

Also, this image would not have been possible if the sun wasn’t reflecting off the water with blinding strength. It was at a perfect angle for the image I was visualizing. Another check. I focused on an area that had the best reflections and set the exposure to be f/8 at 1/2000 second on Provia film. I pre-released the mirror, waited for a downdraft and made an exposure. And again and again, for a total of four photographs.

When I saw the developed transparencies I found all of the exposures to be interesting but this was the best one overall. I printed it two years later in 2006 and even though it is a high contrast black and white image the color balance has to be perfect to prevent any color cast.

I make the Cibachrome prints with a 105mm Apo-EL-Nikkor lens which is the only type of enlarging lens that has no chromatic aberrations. Even though Cibachrome is a color printing paper it’s still the most qualified to reproduce this photograph because it has the highest resolution and deepest blacks of any photographic paper.

The fine details are remarkably resolved and I find fascinating micro-compositions within the image everywhere I look. The image is simultaneously highly specific and very abstract.