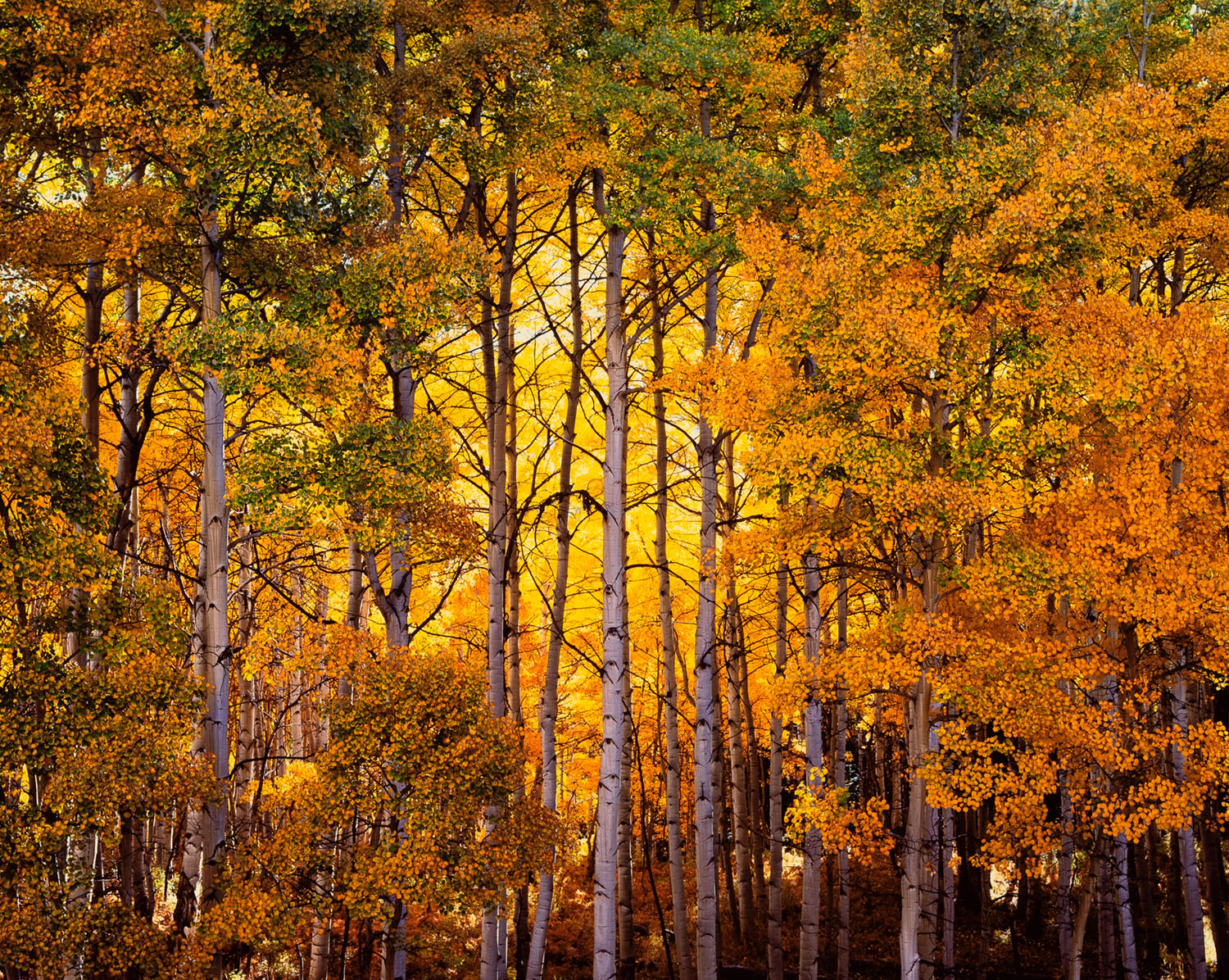 This image was photographed in October 2005. Ruth and I were on a very productive photo trip for two weeks in Utah and Colorado. When the dust settled, we ended up with 14 images that I made into exhibition quality Cibachrome prints.

The weather was cooperative and the aspen forests were in full color. Never before or since did we encounter this wealth of opportunities and so many good images in such a short time.

This group of trees was located in the Grand Mesa area of Colorado at the edge of a small dirt road. The sun was behind the trees, backlighting the open central area with yellow light. Bright fill light was coming from the aspen trees behind me which intensified the orange colors in the trees. It was a unique and extraordinary scene.

While aspens are most commonly yellow, there are some groups of trees that turn orange under ideal spring, summer and fall weather conditions. The leaves on this family of trees were turning directly from green to orange which gave tremendous tonal separation to these leaves, especially the group on the left.

The contrast range was rather high so I needed to expose the transparency film to keep the bright yellow values from washing out and even hold a bit of the sky color peeking through here and there. That meant that the rest of the photo would appear too dark and require exceptional darkroom skill to open the values up to keep the pervading sense of luminosity in the scene, not flatten the overall contrast or lose tonal separation in the lighter tones. I used a 450mm lens at f/64 and 1/2 second on Provia film and made two identical backup exposures. The rising front on the view camera was moved about 1” to keep the trunks vertical.

The transparency languished in my “to print” box for five years until I was ready to tackle the challenge and it was a struggle. I spent four long days and made lots of Cibachrome test prints before I was satisfied that I had produced a print that was worthy of the scene. Each print requires skillful dodging and burning to bring the brightness and density levels into harmony with one another.

The Cibachrome prints of this image continually astonish me with their depth, rich tonality and three dimensional qualities which exemplify what can be done with 8x10” film and skillful hand printing.