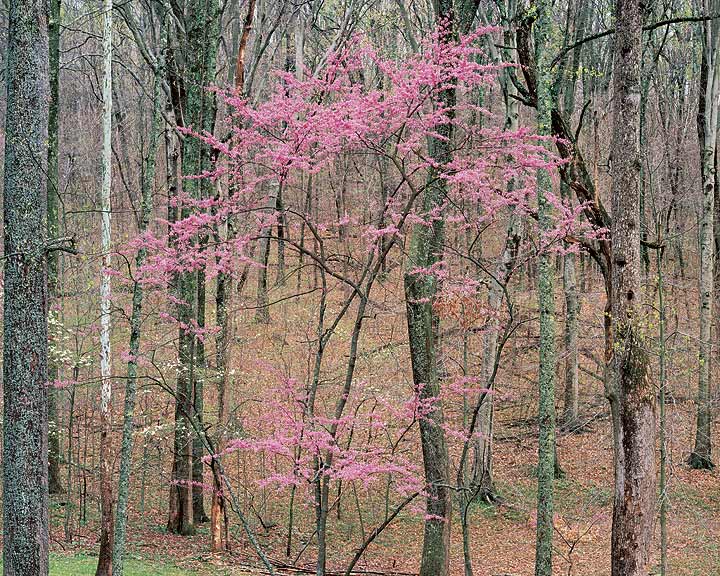 During the fall of 1990 and the spring of 1991 I received a grant to photograph at Bernheim Forest, south of Louisville, Kentucky. The forest is a wonderful private preserve, set up by Isaac Bernheim. Most of the forest is off-limits to the public, so that it can maintain it’s natural and wild status; part of the forest is wild but accessible to the public; and part of it is an arboretum with picnic and play areas for the enjoyment of all visitors.

Part of the blessing of the grant was that I had a cabin to stay in on the property and access, with keys to all the locked gates, to all of the forest—14,000 acres. I photographed for about a month in the fall and a month in the spring and have been surprised how many successful images I obtained during my stay. The director of the forest has kindly allowed me to return over the years to continue to photograph for a few days here and there.

This photograph was taken very early one morning. I had watched this tree for a couple of weeks as it began to flower and had waited until it was in full bloom. There was very little wind that morning—an absolute necessity, given the delicate branching and fine detail of the blossoms. I setup the camera and waited and waited for the wind and branch movement to totally subside. It became clear after about 15 minutes that the wind was only going to pick up, so I timed the exposure so that the slight branch movement was caught midway in it’s cycle.

I exposed only one sheet of film and went on that morning to see what else awaited me— nothing, as it turned out. I watched this tree over the next week, but always either the light was wrong or the wind was too strong to attempt another exposure.

While I took this photograph in 1991, it was not until the summer of 1995 that I finally printed it successfully. It took that length of time for me to gain enough expertise in printing to insure that the delicacy and finesse of the image was preserved and to develop a special, unique masking technique which was a necessity for this image to work.

To me, the image has an almost angelic quality to it—one of delicacy and feminine finesse, peaceful and inwardly healing and soothing.