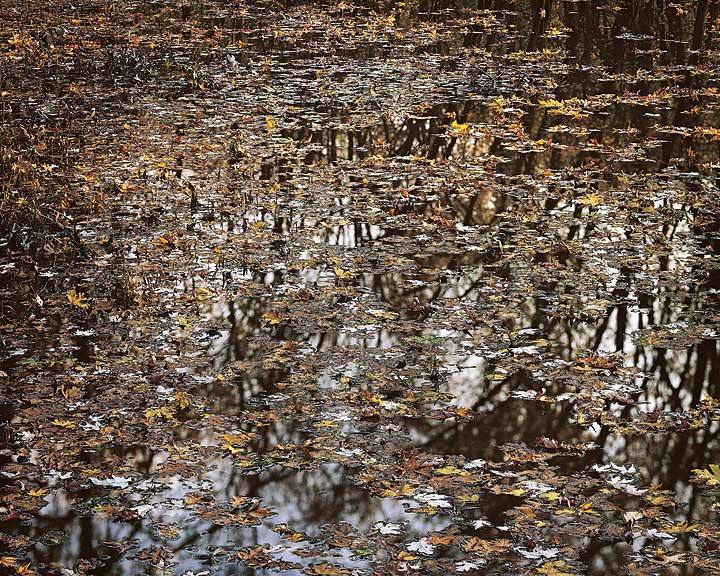 While traveling around the country on my second major photography trip, the first being in 1987, my wife Ruth and I decided to visit her sister in New Jersey. While Ruth and Charlene went out and about for the day, I attempted to find a worthwhile photograph.

New Jersey is not the barren, industrial wasteland which many people seem to imagine. There are wooded areas, farmlands and numerous rivers. After having a not-too-successful day, I returned to Charlene’s house, where the key to the back door was supposed to be waiting for me, and the women were due to return. Well…no key, and no sisters. After waiting for over an hour, I left a note and went northeast in a different direction to search for a photograph.

I came across this river, which had flooded from the recent rains. It was around 5:30 pm and the sun was behind a dense cloud layer. The wind was mostly calm but the leaves still slowly wandered across the water, moving with gentle puffs of air and the hidden current of the river.

I sat and viewed the leaves and the river for thirty to forty minutes, looking for a decent photograph, measuring the light and weighing the many possibilities and potentials of the scene. As the sun continued to sink lower in the sky, it was apparent that it might possibly peek out from under the cloud layer. Hurriedly, I ran to the car and brought back the equipment and set the camera up on the tripod.

As I was finishing my setup, the sun appeared from behind the clouds. Angled sunlight streaked across the water, lighting the scene with a golden glow. I was just able to stop the motion of the leaves by using a relatively large lens opening and pushing the film one stop so that I could use a shutter speed of one second. After quickly photographing this scene, and one other showing more of the trees, the light faded and the scene once more became grey and pale. The wind started to pick up as the temperature dropped, and I drove back to the house—quite glad to have been locked out and thankful for the events which led to this image.