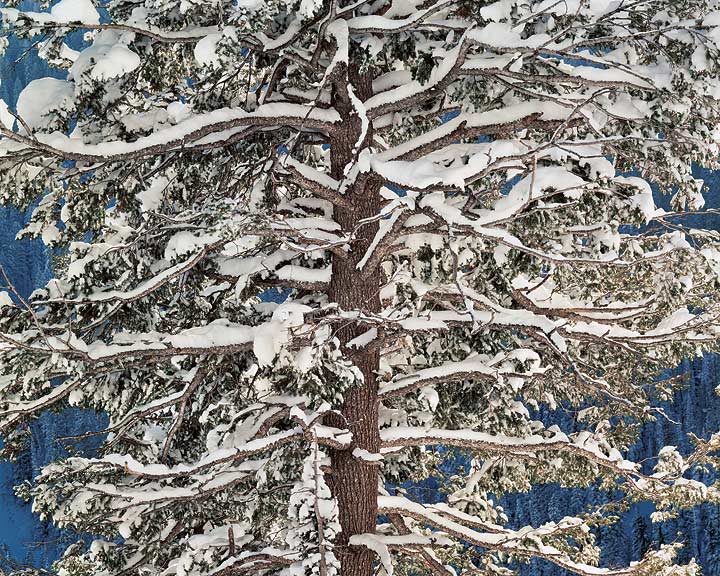 When returning from an autumn photographing trip in 1989, my wife Ruth and I were spending the night in Ogden, Utah. While traveling, I usually carry with me a crystal controlled weather radio, which picks up the NOAA weather broadcasts across the country, 24 hours a day. In the early evening, as was my usual custom, I tuned in to see what the weather would be the next day.

The big news was that a storm watch and a “traveler’s advisory” was in effect—a storm front was moving in that night and was projected to dump 24-36” of new snow on the mountain passes. I spoke with Ruth, and we agreed to get a few hours sleep and then head up over the mountains to Wyoming and the Teton Mountains.

Arising at 3:00 am, we loaded the car and headed north and east, up over Logan Pass, past Bear Lake headed towards Jackson, Wyoming. The snow was coming down thicker and thicker and piling up on the roads. Fortunately, we had our trusty Toyota 4-wheel drive wagon but with regular, rather worn tires. Slowly traversing the snowy mountain passes, we carefully inched our way forward. We entered Jackson Hole at daybreak to the incredible vista of 24-30” of fresh snow on everything.

The day dawned clear, cold and bright. The storm had passed on, leaving a calm and quiet peace. The sky was a deep, brilliant blue and the temperature was 20° below zero. We drove around and I made a number of worthwhile photographs in the valley.

Later in the day, around 11:00 am, I decided to see what photographs might be possible at a higher elevation, with the potential of more trees and mountainsides, so we headed back up Jackson Pass. I came across this wonderful fir tree, silhouetted against the mountain ridges. Behind me lay a large snowbank and the rocky mountain which bounced light back into the tree, softening the contrast while still preserving shape and form in the trunks, branches and lofted snow.

I exposed two pieces of film, one each of Kodak and Fuji, as at that time, there was an occasional problem with Fujichrome where white highlights would take on a magenta cast. I print using the Kodak film, which preserves a neutral color cast throughout the photograph. This image forced me to really learn about highlight masking, as it is necessary to make a precise highlight premask to preserve the separation of tones in the whites and near-whites.

To me, the image conveys a sense of peace, strength, poise, and balance—infused with radiant light everywhere. It is inevitable that the creation will reflect some of the attributes of the Creator!