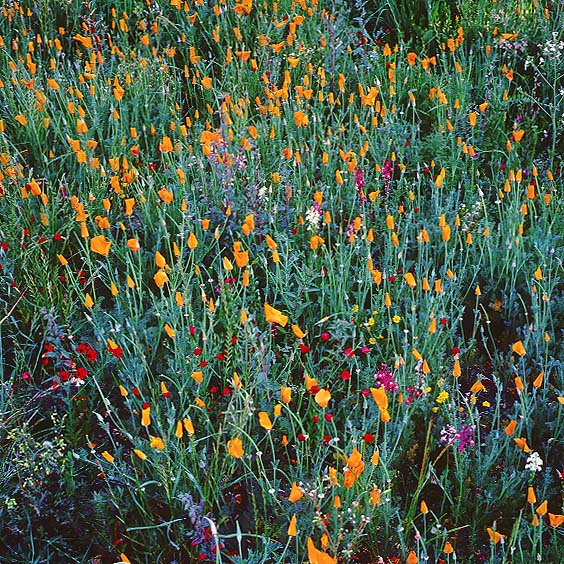 In the spring of 1999 I had a gallery opening at the Alinder Gallery in Gualala, California. Ruth and I drove there, traveling with my camera gear as usual. While driving north on California Highway 1 I spotted this group of wildflowers growing by the side of the road where Ruth pulled over so I could get a close look at them.

The flowers certainly had photographic potential but it wasn’t going to be an 8×10 photograph for two reasons. 1. The flowers were getting tossed around as cars and trucks went by and the 8×10 camera would need a slow shutter speed which would result in a blurred image. 2. The only composition I saw was in a square format. Hasselblad to the rescue!

I composed the image using my 50mm lens and waited until the flowers were still and no traffic was coming, then made one exposure at f/16 for 1/60 second on Velvia 50 film.

Making a Cibachrome print required a precise density of contrast mask, enough so that the image wasn’t harsh looking but not so much that it looked flat or two dimensional. The color balance for the entire image is very critical. The backdrop for the brightly colored blossoms is all of the vertical green leaves and stems. When the color balance is just right, all those greens show flashes of blue-green and yellow-green which greatly increase the tonal separation of the leaves and stems. This in turn accentuates the shape of all the gold poppy blossoms and their relationship to the red, purple and white blossoms.

The Cibachrome prints have great three dimensionality and boy, do the poppies pop!