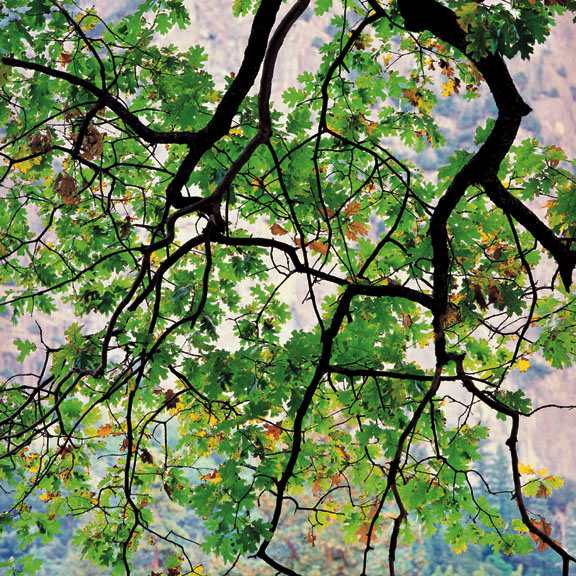 Once in a while I photograph in a National Park. When I do, most of the photographs are not of recognizable features of the park. This image is an example of that, having been made in Yosemite National Park in 1992.

The oak tree is located on the valley floor, the background is the valley cliff. The day was overcast which resulted in delicate background colors and tones and soft light on the green leaves which made them more uniform in color. The silhouetted black branches provide a strong contrast to the muted tones. Without the black structural framework the photograph would appear flat and uninteresting.

In composing this photograph I found the best viewpoint so that the shapes and colors of the background had an optimal interaction with the leaves and branches. I used my 250mm Superachromat lens on my Hasselblad to photograph this on Fujichrome 50 film.

I first made the Cibachrome prints of this image 12 years later, in 2004. The pastel background and the strong black branches provide a somewhat stained glass window effect which gives the prints luminosity and depth.