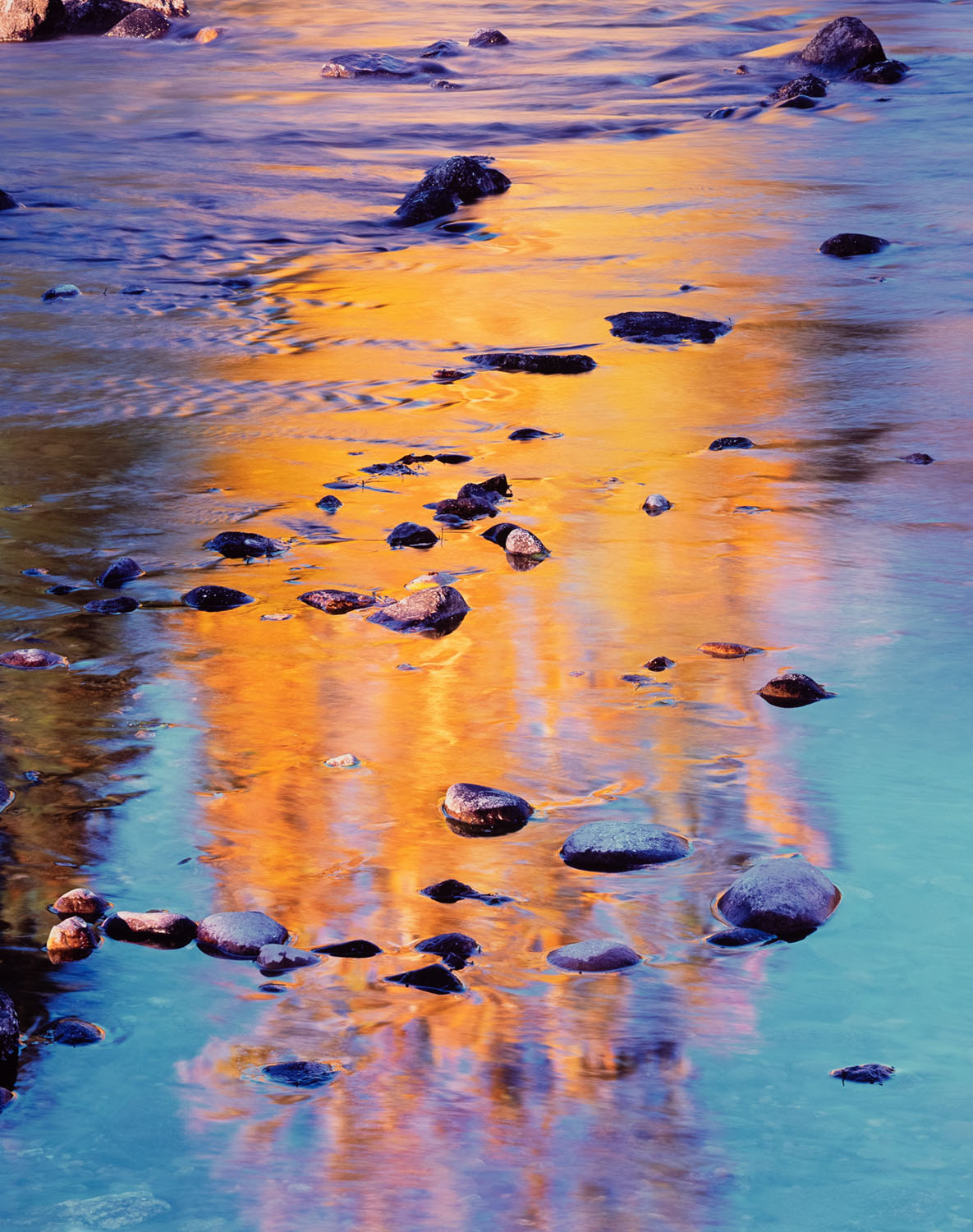 In 2004 Ruth and I went on a two week photo trip to Wyoming and Colorado at the end of September. We photographed first in Yellowstone National Park and then Grand Teton National Park. Most of my photographs are not taken in national parks and the few that I do take are rarely of recognizable features.

On September 27 we had camped out at Grand Teton National Park in our camper van and I was out and about early in the morning as the sun was just beginning to rise. The sky was clear and there wasn’t much wind. There was beauty all around us but I could not find a worthwhile photograph no matter where I looked. We got back in the van and drove over to Jenny Lake which is at the foot of Grand Teton Mountain.

I was getting anxious; the sun was rising, the light was gorgeous and the morning was slipping through my fingers. I left the equipment in the car and raced around until I saw what was happening in this scene. This stream is the runoff from Jenny Lake and the sun was hitting a group of aspen trees with golden leaves. I could see there was a photo possibility that combined the reflections from the trees and sky, the pattern of small stones in the creek, the water ripples and the subtle view of the rocks under the water.

Ruth and I literally ran with the camera gear to this spot and set up the camera in record time. The sun was rising and the sunlight was headed towards the camera. I had to take the photo before the light hit the lens which would ruin any possibility of a photograph. I used the 800mm lens with the back tilt to adjust the plane of focus parallel with the water and stopped the lens down to f/45 to get everything in focus. I made one exposure on Provia film for one second. You can see that the sun was hitting some of the stones at the bottom of the image. We were able to get this image with just one minute to spare.

I titled this image Daybreak not just because it was but also because its colors and drama were reminiscent to me of Maxfield Parrish. This image is a perfect example of what amazing work can be done with transparency film and Cibachrome printing. There’s an astonished depth and life to the image with incredible subtle color differentiations in the gold and blue reflections and delicate pastel images of the rocks beneath the water. This is an image that always compels me to examine it up close and it never fails to fill me with wonder and joy.