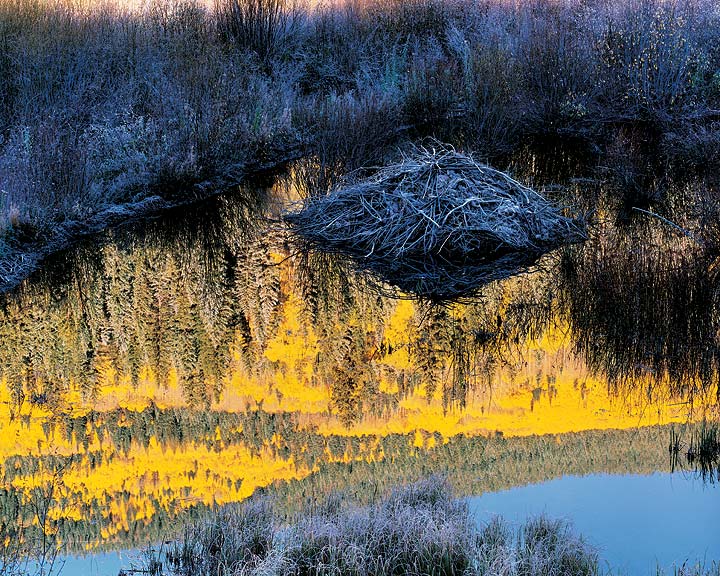 In 1997 Ruth and I went on an extensive cross country photographic trip and at the beginning of October we found ourselves in Colorado. The previous day I made my photograph “Telluride Aspens” just east of Telluride, then we drove south, staying overnight in our camper van at Lizard Head Pass at the 10,000 foot elevation. Early that morning as the sun was just coming up I used my Hasselblad to make “Beaver Pond, Ice and Sunstars.”

We drove south until we came upon this beaver lodge on the west side of the road. The sun was striking the aspen covered hillside but the beaver pond was in the shade. The photographing potential was there and I could see that I had about 15 minutes before the sunlight would hit the pond. We needed to act quickly.

I composed the image, which was disorienting. I had been using an 8×10 camera for 10 years and had trained myself so that when I viewed the image upside down on the ground glass I could clearly visualize how it looked right side up. So it made me dizzy just looking at the bright aspen tree images wrong side up… or was that right side up?

Taking spot meter readings I could see that the brightness levels of the scene were pushing past the ability of the film to record detail in the brightest and very dark areas. However I knew if I waited until the sun was almost in the scene there would be just enough bounce light off the dried grass in the field to make it work. It helped that the beaver lodge and many of the grasses had a heavy coat of frost that would provide a lot of detail contrast to give a healthy amount of tonal separation.

I used a 30” Red Dot Artar lens at f/64. Because I didn’t want to miss the image by waiting a few seconds too long I exposed one piece of Velvia 50 film for 6 seconds just before the sun got to the edge of the scene. I put the slide back into the film holder, flipped it over, cocked the shutter, waited for the sunlight to get close, fired the shutter… and it stuck open!

Fortunately Ruth had another film holder ready that I popped into the camera, took a quick spot meter reading and made an exposure at f/64 for 2 seconds. It was a near thing, at the top of the photograph you can see the sunlight just starting to intrude into the scene.

There was enough bounce light to expose the film within range, although making the Cibachrome prints is not easy. The final result has a lot of depth.

The disorienting aspect of the upside down reflection of the bright aspens is enhanced by the fact that we are used to seeing scenes in nature where objects in the distance have bluer tones than objects in the foreground, due to haze and light scattering. Here, the colors are dramatically reversed. There is also the visual contrast between the mirror like stillness of the pond and the hard edges of the frosted grasses and beaver lodge sticks. We were grateful the beaver family had slept in a bit on that chilly morning, keeping the pond perfectly reflective.

No matter what explanations are made about this photograph, it is a unique image which has a powerful “believe it or not” mystery to it that defies our visual preconceptions.