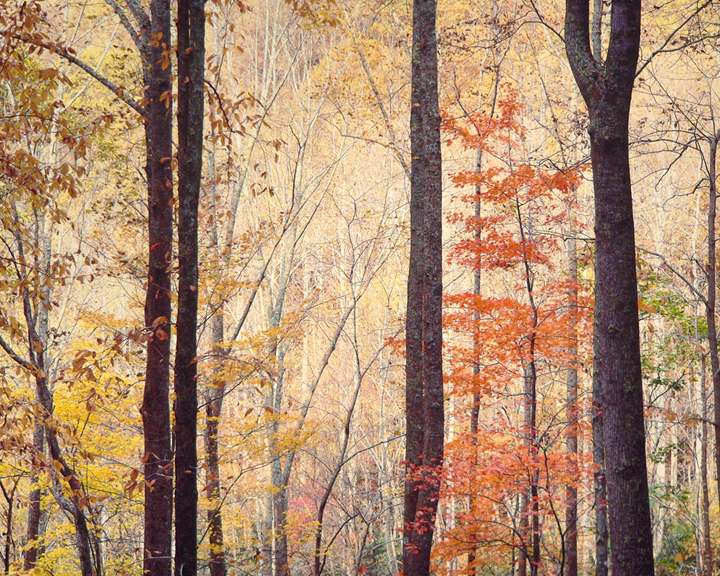 In autumn, 1991, Ruth and I went on a very productive photo trip across the USA. At this point we were about three weeks into our trip and found ourselves in Virginia in late October exploring the photographic potential along the Blue Ridge Parkway. We were about mid-way in the Parkway when the light was fading and we needed to find a place to camp for the night.

We had recently purchased a used Okanagan camper van, which was self contained and gave us more options than pitching the small tent we used in 1987. We found a gravel side road that went steeply off the south side of the Parkway and found a wide, flat spot at the apex of one of the turns where we pulled over, cooked dinner and went to sleep. Arising before daybreak, I left the van and walked up and down the mountainside road a bit as the world started to light up with the break of day.

I could see that this beautiful forested area was full of promise. And thankfully, there was no wind whatsoever… the bane of 8x10” photographers.(Smaller f/stops and longer shutter speeds are necessary to get enough depth of field with these large cameras.)This was going to be a day to remember.

This was actually the third photograph I made that morning. The first was “Glowing Appalachian Forest,” when the soft early morning light was beginning to fill the forest. The second was “Yellow Maple, Forest and Light,” when the sunlight was starting to hit the ridge beyond the foreground trees and then finally, this image. Each photo was created using only one exposure on a single piece of film and the three images were made within 100 yards of each other, all within the space of about 30 minutes. This couldn’t have been possible without the skilled help of Ruth, who stops the lens down to various f/stops as I focus, dusts off film holders before shooting, writes down the exposure information in our log book and helps to move equipment quickly from one spot to another. My pit stop crew of one!

While this image was photographed in 1991, I didn’t make the first print until 2012, 21 years later. It was technically a challenge to bring this image to life as a fine print, including holding the brightest values without burning out or becoming chalky and printing the dark trunks with full detail and tonal separation. The composition, lighting and tonal values remind me of classical Chinese screen paintings. Several people told me that when they view this print they have a sense that “I’m really there, looking at the sunrise light in the forest.”