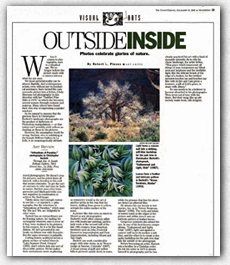 When it comes to photographs, ours is a skeptical age. We no longer believe the picture made with a camera mirrors what the eye sees.

We know pictorial reality can be altered digitally. And contemporary artists, even without any technological assistance, have turned the camera-made picture into a fiction. Cindy Sherman led photography in this direction with her “Untitled Film Stills of 1979,” in which she becomes several women through costume and makeup. Many others have found their own way of expressing a parallel mind-set.

So it’s natural to assume that the glorious blues in Christopher Burkett’s landscape photographs are the product of darkroom or Photoshop manipulations – or that nature can’t possibly yield yellows as dazzling as those in his pictures.

However, the assumption would be wrong. Burkett, who is exhibiting at the Joseph Bellows Gallery in La Jolla, is an unapologetically old-fashioned photographer. He doesn’t crop his pictures, and he prints them all himself, with a devotion to his craft that seems obsessive. To get the sort of contrasts in color and tone he finds in nature, Burkett uses color transparencies and black-and-white contact negatives in combination to achieve the final image.

Palette alone isn’t enough reason to see his – or anyone’s – photographs. But the selections in “Intimations of Paradise,” which span the ’80s and ’90s, are delightful in other ways.

Burkett has an extraordinary eye for framing nature, for making his rectangular windows onto it seem as if they were destined to be pictures.

In this respect, he is a lot like Ansel Adams. He isn’t grounded in one locale, as Adams was with Yosemite. But the same reverence is palpable.

Curling leaves, scattered across a glassy surface of varied blues in “Lake Summer Pond, Oregon” (1992), don’t cohere into any sort of discernible pattern. Yet he makes their randomness seem as pleasing as symmetry would in the art of another artist, in the way that the leaves, shifting from green to yellow, activate the entire surface of the pond.

A picture like this owes as much to Monet as any photographer. Burkett’s work often conveys affinities with landscape painting, particularly work of the second half of the late 19th century, from American luminists such as John Frederick Kensett to Impressionists and Post-Impressionists, including Monet and Van Gogh.

Burkett can work considerable magic with wide vistas, as in “Beaver Lodge at Sunrise, Colorado” (1997). A broad sweep of gold and yellow hills is pictured upside down in water, while the grasses that line the shore are tinted an ethereal blue.

He attunes his eye keenly to intimacies, too, as in “Green Veratrum, Alaska” (1993). The curls and twists of leaves reach to the edges of the picture and within turn it onto an intricate pattern of feather forms.

Gorgeous contrasts also attract his eye. In one of his best-known compositions, “Cottonwood and Light, Utah” (1987), light cast against a canyon wall turns its surface a soft blue, and the effect is to create a dramatic backdrop for the pale tree that fills the middle of the photograph.

Before becoming an artist, Burkett was a brother in a Christian order. He left his order in 1979 to devote himself to photography and he has clearly practiced his art with a kind of monastic intensity. As to why he chose landscape, the artist writes, “That grace which transcends all things of man overpowers my blindness and ineptness and the ineffable light, like the delicate brush of the edge of a feather, for the briefest moment touches me and touches my film with its fire and I am given a treasure, a gift of God’s grace, to share with others.”

No one needs to be a believer to become absorbed in his photographs. They seem out of tune with the times. But their song, like an old melody made fresh, still delights. 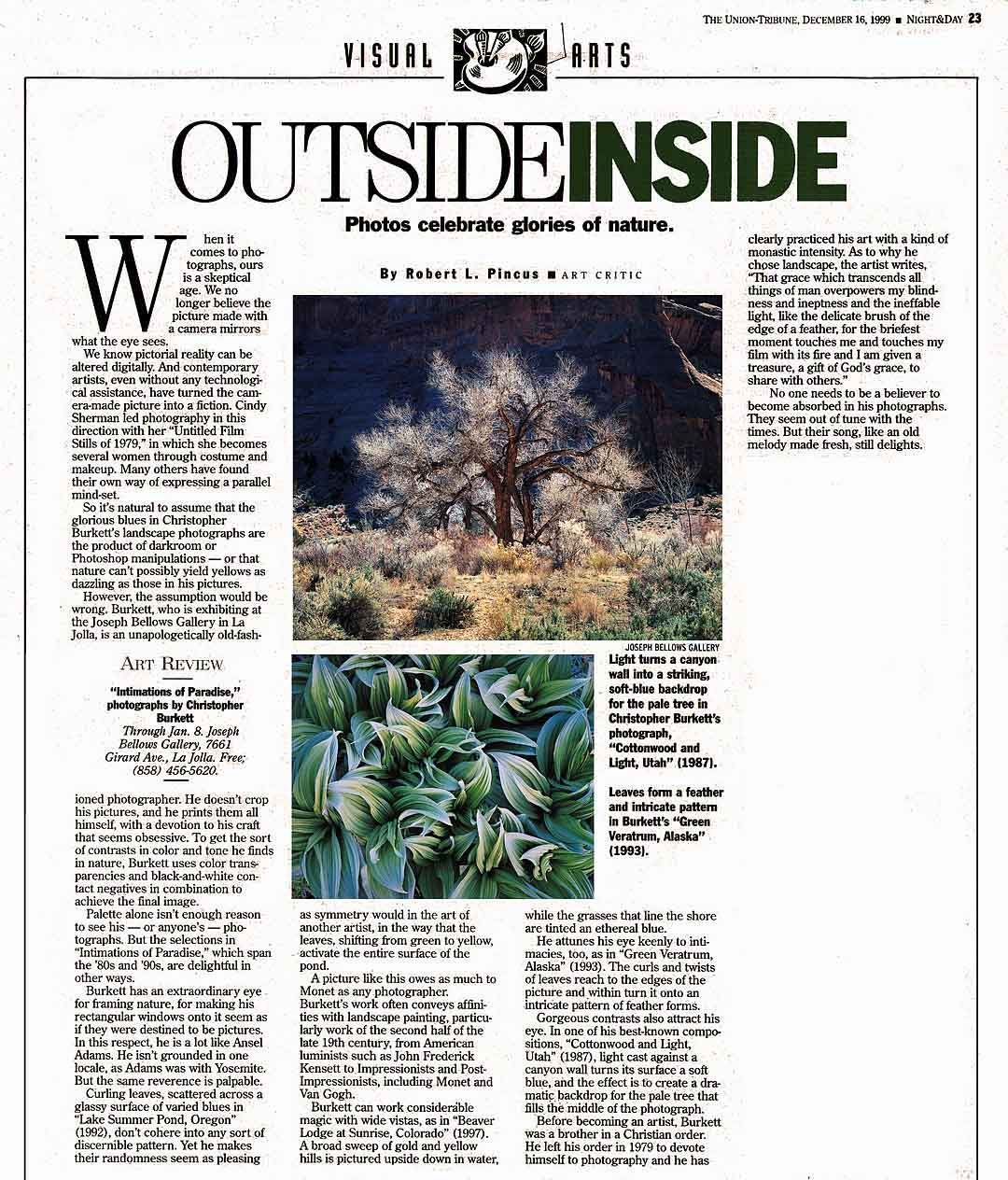