Let There Be Light!

A Talk with Christopher Burkett 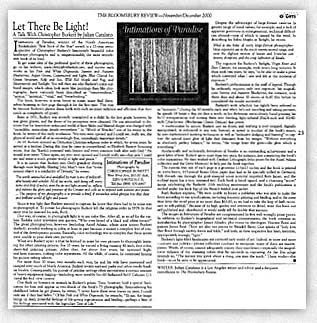 Intimations of Paradise, winner of the North American Bookdealers “Best Book of the Year” award, is a 25-year retrospective of Christopher Burkett’s luminously beautiful color landscape photographs and is, unquestionably, the most remarkable book of its kind.

To get some idea of the profound quality of these photographs, go to his website, www.christopherburkett.com, and survey such works as his Pink and White Dogwoods, Sunrise and Autumn Blueberries, Aspen Grove, Cottonwood and Light, Blue Glacial Ice, Green Veratrum, Kelp and Sea, Wild Red Maple and Fog, and Silverswords and Sunlight. You will then see why Burkett’s color-suffused images, which often look more like paintings than like photographs, have variously been described as “transcendent,” “serene,” “mystical,” “vital,” and “breathtaking.”

The book, however, is even better to some; many find themselves beaming as they page through it for the first time. This may be because Burkett’s photos shine forth with such an inner radiance and affection that they catch us completely off-guard.

Born in 1951, Burkett was severely nearsighted as a child. In the first grade, however, he was given glasses, and the doors of his perception were cleansed. He was astonished to discover that his heretofore unfocused world of fuzzy blobs and blurred shapes was charged with “incredible, miraculous details everywhere.” In “World of Wonder,” one of his essays in the book, he writes of this early revelation: “My eyes were opened and I could see, really see, the physical world and all of its exceedingly fine, exceedingly important details.”

At 19, Burkett entered an Orthodox Christian religious order in which, for seven years, he served as a brother. During this time he came to comprehend, as Elizabeth Barrett Browning wrote, that the “Earth’s crammed with heaven and every common bush afire with God.” He would later write: “Once again, my eyes were opened and I could really see–but now I could see and sense a much greater world of light and peace.”

It is in nature that Burkett sees God’s grandeur shining through most brightly. Sharing John Muir’s view that “every natural object is a conductor of Divinity,” he writes: The world untouched and undefiled by man is one of indescribable beauty and wonder. All of our world, each living cell, every stone and drop of water, even the air and light around us, reflects and mirrors the glory and presence of the Creator and calls us to respond with wonder and praise É The purpose of my photography is to provide a brief, if somewhat veiled glimpse into that clear and brilliant world of light and power.

Since it was light that Burkett wanted to capture, he knew that there had to be some way to photograph it. To pursue his photography Burkett left the religious order in 1979. In that same year he married his wife, Ruth.

One way, of course, to photograph light is to use color film. After all, as an ad for the earliest Toshiba color television sets queries, “Who ever heard of a black and white sunset?” The great photographers, however (including Ansel Adams, whose zone system Burkett studied), avoided working in color, at least in part because it meant a complete loss of control of the development process. Basically, color technology was so complex that these artists were unable to print their own pictures.

What sets Burkett apart is that he learned to print his own pictures by thoroughly learning the offset printing process. For 10 years, he earned a living running 40-inch, four-color, sheet-fed printing presses. After that, for about five years, he operated high-end laser scanners, making color separations. All the while, of course, he continued honing his picture-taking talents.

For more than 20 years, two months each year, he and his wife have journeyed and camped over much of North America. Burkett avoids national parks and other overly familiar locales. Consequently, his pursuit of pristine settings often necessitates a certain amount of heavy-equipment lugging–including, most notably, his old-fashioned 8X10 Calumet C-1 metal flat-bed view camera.

One finds no humans or animals in Burkett’s prints. Trees, however, hold a special fascination for him and appear in two-thirds of the book’s 73 photographs. Remembering his childhood before he got glasses, he wrote, “I never knew there were leaves on trees, I could only see if they had fallen.” Of his Pink and White Dogwoods, he remarks, “To me, the image brings up deep, powerful feelings of life-giving regeneration and healing–perhaps a hint of the feelings associated with the legendary Tree of Live.”

Despite the advantages of large-format cameras (a greater range of tonal values, for example, and a lack of apparent graininess in enlargements, technical difficulties abound–one of which is caused by the wind. In describing his Yellow Maple at Twilight, he writes: Wind is the bane of every lare-format photographer. Most exposures are in the one to twenty second range, and even the slightest motion of leaves and branches can destroy sharpness and the crisp definition of details.

The exposure for Burkett’s Twilight, Virgin River and Zion Canyon, for example, took seven long minutes. It then took him years, he says, “to be able to make a print which conveyed what I saw and felt at the moment of exposure.” Burkett’s perfectionism is the stuff of legend. Though he ordinarily requires only one exposure, his magnificent Sunrise and Autumn Blueberries, for instance, took three days and about 50 sheets of 8X10 film before he considered the results successful.

Burkett’s work schedule has rightly been referred to as “monastic.” During the 10 months each year when he’s not traveling and taking pictures, he spends 14 hours a day, six days a week, in his darkroom meticulously hand-printing his 8X10 transparencies and turning them into dazzling, light-infused 20X24-inch and 30X40-inch Cibachrome (Ilfochrome Classic Deluxe) fine prints. A traditionalist by nature, Burkett uses no filters, and nothing is ever cropped, digitally manipulated, or enhanced in any way.

Instead, as noted in another of the book’s essays, he uses sophisticated masking techniques as well as “extensive dodging and burning” to capture the special inner glow of light that shimmers from his images.

“Without everything in absolutely perfect balance,” he writes, “the image loses the glow–the glow which is everything.”

Aesthetically and technically, Intimations of Paradise is an outstanding achievement and a great labor of love. Burkett spent more than two years, for instance, just completing the book’s color separations. He then worked with Gardner Lithograph (who prints for the Ansel Adams collection and the Getty Museum) to help put the books together. The custom trim size of each page is a generous 11 1/2X13 inches and the book is printed on extra-heavy, 115-pound Ikano Gloss paper that had to be specially milled in Germany. Silk threads run through the gold-stamped cover material imported from Japan, and the endleaf paper has a rare, textured feel. Each book is hand-signed, and a charming “secret” image celebrating the Burkett’s 20th wedding anniversary and the book’s publication is tucked under the back flap of the French-folded dust jacket.

Ruth Burkett explains, “We were unable to locate a publisher who was able to make the book according to our specifications, including domestic printing and binding, and at the same time keep the retail price at no more than $65.00, so we had to take the leap of faith necessary to self-publish.”

Because of its high quality and attention to detail, were this book not self-published and distributed, it would easily sell for double that amount. The images in Intimations of Paradise are complemented by five well-wrought prose pieces. In addition to Burkett’s biographical and technical commentaries, the book contains an introduction by photographer James Alinder, plus essays by theologian Vincent Rossi and painter James Reid. There are also two poems by Wendell Berry. One speaks of “holy love that flows through earthly forms and folds,” and both, in their respective last lines, mention, appropriately enough, “light.”

Burkett’s light-filled landscapes are extraordinary works of art. Indeed, as more and more museums and judicious private collectors continue to recognize, many of them are masterpieces. Words, of course, cannot adequately convey their excellence–especially the magnificent richness of the stunning colors that he succeeds in capturing.

As the Zen adage reminds us, “The instant you speak about a thing, you miss the mark.” These works–this book–must be seen to be appreciated.